TV CRITIC's NOTEBOOK. In the ugly divorce between dad and mom MultiChoice and A+E Networks the biggest loser is the kids - viewers - who will bear the brunt of TV parents who now dislike each other. 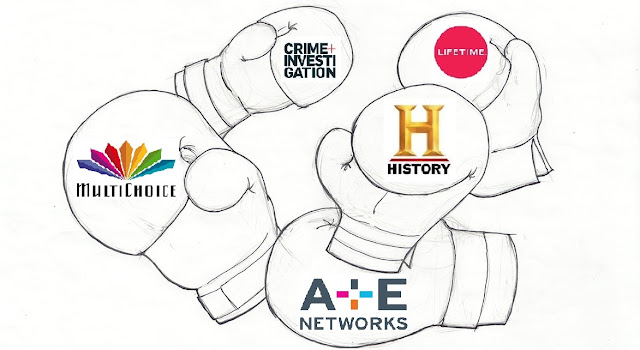 Forget The Curse of Oak Island - that cursing you hear comes from thousands of DStv subscribers left confused, angry, resentful and very scarred after discovering that the once oh-so-wonderful marriage between dad and mom MultiChoice and A+E Networks has irrevocably fallen apart and turned very nasty.

Citing "irreconcilable differences" the damage of the divorce between MultiChoice and A+E Networks has a biggest loser: The children - because it's always the children who have to pay the price, in this case DStv subscribers.

It's ordinary DStv subscribers and consumers who don't understand what happened, who are not privy to the fights behind the bedroom door, and who are left dazed, confused and crying over what went so wrong.

It's ordinary Dstv subscribers and consumers - not sure if it's perhaps their fault - who will end up with the biggest sense of loss when MultiChoice takes their beloved History (DStv 186), Crime+Investigation Network (DStv 170) and Lifetime (DStv 131) channels away from them at the end of October.

It doesn't matter who is "right" and who is "wrong" or which one of the parent's side you're on - MultiChoice or A+E Networks.

In the end, the commercial relationship between the two companies had turned sour, the partners are parting ways, and the TV kids are left with nothing in the middle.

Unlike in America where multiple pay-TV operators exists, all carrying most of the available TV channels, when a channel carriage dispute arises during renewal negotiations and channels end up going dark, consumers who really want one or certain channels are able to switch to another service.

That's not possible in South Africa.

The vast majority of pay-TV channels available in South Africa are only carried on MultiChoice's DStv, meaning that consumers are stuck with one option to get a channel like History for instance, since China's StarTimes has an extremely weak offering in its StarSat service that constantly deteriorates (like the abrupt and shocking loss after Disney pulled all of its FOX-channels this week).

As most divorces go, the MultiChoice and A+E Networks break-up is an ugly one - there's no "amicable parting".

It's sad that the parents failed to work better together for the sake of whom they both love: the viewer.

As literally thousands of DStv subscribers have already been vocal and signed a petition for the channels to remain on DStv, they'll probably need some bereavement counselling to get over the fact that mom and dad was unable to work together on their relationship and ended up breaking up what was a happy TV home.

Tragically, the MultiChoice and A+E Networks break-up isn't a "based-on-real-life" Lifetime movie that DStv subscribers can choose to tune in to watch.

Instead, it is one the pain of which they themselves are forced to feel personally as a stakeholder who has absolutely no choice in the TV divorce, with no other option but to work through the painful sadness, tinged with a sense of terrible loss, anger and extreme disappointment at parents who should have done better.