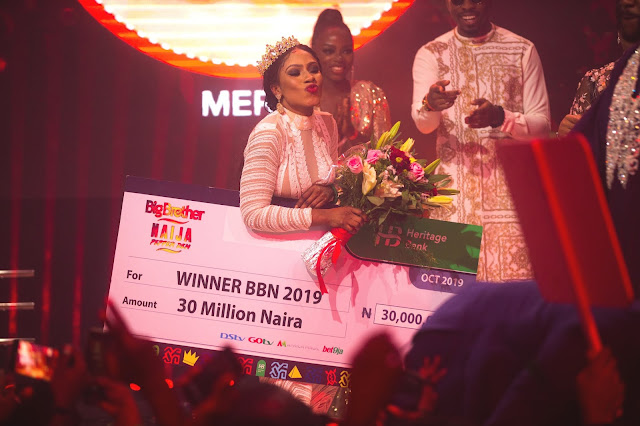 On Sunday night Mercy Eke (26) walked out of the Big Brother Naija house as the winner of the 4th season, becoming the first female winner in the history of the Nigerian reality show.

She now wants to start her own fashion brand or clothing label.

The live finale ending another season of M-Net's camera-filled reality house in Lagos was broadcast on MultiChoice's DStv satellite pay-TV service in Nigeria and across sub-Saharan Africa with Mercy who clinched the title as one of 5 remaining housemates left.

After 21 contestants entered and with an additional 5 who were added, Mike, Mercy, Frodd, Omashola and Seyi were the last ones left after 99 days in the season that was filmed in a studio in Lagos, Nigeria.

It marked the first time since 2006 that a Big Brother Naija season was filmed in Nigeria. Previous seasons have been making use of existing infrastructure and customised studio space in South Africa.

As in previous seasons the latest Nigerian season of the Endemol Shine format was once again overshadowed by physical violence in-show despite M-Net and the producers who again reiterated that they're doing enough to protect housemates.

In late-September Anita Natacha Akide, known as Tacha, was expelled after she started arguing with Mercy and then got involved in an ugly physical brawl which saw her booted from the show.


ALSO READ: From a male stripper to a lawyer and a police officer working in Londen are part of the 21 Nigerian housemates competing in the 4th season of M-Net West Africa's Big Brother Naija on DStv that is now done from a studio in Lagos.
ALSO READ: IN IMAGES. 50 photos from inside the house of the 4th season of Big Brother Naija and its colourfully designed interior.
ALSO READ: TV CRITIC's NOTEBOOK. Journalists from across the continent on a Big Brother Naija TV junket with MultiChoice Africa showed off their dazzling feeding frenzy as they 'selfie'd just about everything - except for actually reporting the news and about the business of Big Brother.
on 12:59:00 PM