TV CRITIC's NOTEBOOK. MultiChoice lies and says in its financial report presentation it 'enhanced content discovery' - in reality the pay-TV operator did the exact opposite during the year and made it more difficult and worse. 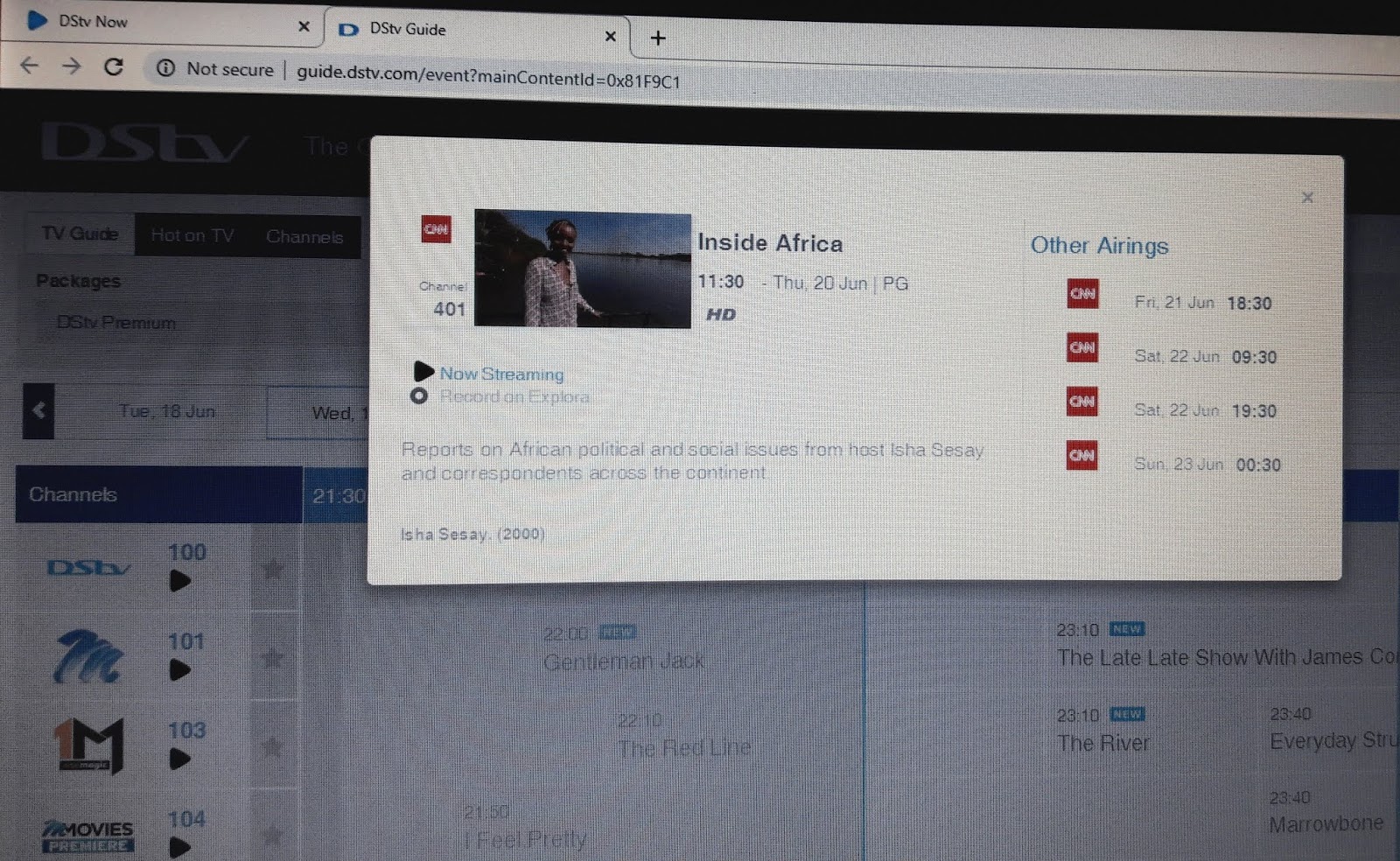 MultiChoice that released its financial year report to 31 March 2019 on Tuesday blatantly lied in its presentation document, noting how it had "enhanced content discovery" - in fact, the pay-TV operator did exactly the opposite.

The truth is that MultiChoice's "content discovery" - through deliberately failing to help and do for DStv subscribers what works for them, meeting them where they are at, and doing it properly, had for the financial year in question been more sh*t than ever.

In its 2018/2019 financial year, MultiChoice deliberately did things, and did some things so badly, that all combined are making it now much more harder than ever before for ordinary DStv subscribers to know when what content is on and where to find it.

"Content discovery" is the phrase used to describe both the process and the state-of-being of viewers finding out, knowing or searching for content; and knowing what content to watch, on what platform or channel, when, and what it's about.

How about Game of Thrones? How does a viewer discovery that it's on M-Net (DStv 101), a final season; but also on Showmax, but also Express from the US, shown live at 03:00 in the morning, but again in prime time at 22:00, when repeats are, that previous seasons are stacked on the Showmax library-carousel, that there's a making-of documentary, who's in it and what the show is about? 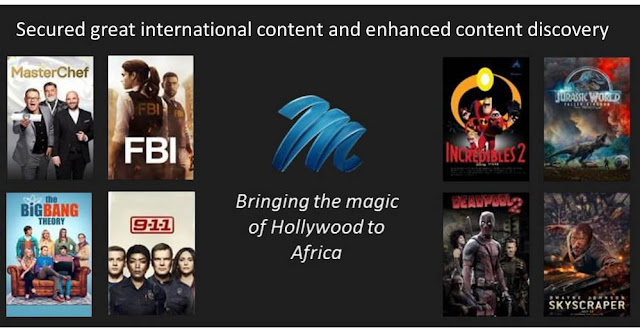 MultiChoice has the audacity to tell investors in its presentation that it "enhanced content discovery". Meanwhile, it later mentions how it "discontinued print magazine" as part of "improved operational efficiencies".

Taking information away from customers isn't "enhancing content discovery" - it's taking away something that helped.

While millions of DStv subscribers, especially older customers, are now without a physical DStv TV guide magazine and don't know anymore about what's showing and where on DStv there is something that they might want to watch, the same holds true for the millions of hotel guests who used to get a magazine in their rooms.

They now have nothing except remote controls with a prominent Netflix button that they'd rather press for on-demand programming. MultiChoice sacrificed physical space where it literally owned a strong and embedded DStv brand space in every room and literally just capitulated without a fight, handing it to its biggest rival, Netflix, on a silver platter.

In a country where data is expensive and universal broadband penetration lacking, MultiChoice wants its customers to pay to use data to go online to struggle with a temperamental and mistake-riddled online DStv channel guide using mobile phones if they want to search for something they want to watch.

Newsflash: That's not going to happen.

Neither does MultiChoice call centre operators have a physical magazine to quickly tell callers when programming is on as used to be the case. M-Net analogue subscribers - again largely older, yet extremely loyal customers, who were moved to a special DStv bouquet - got their schedules abruptly ripped away as well.

That isn't "enhancing content discovery" - it's taking away something that helped.

Where DStv subscribers had access to 30 days schedules for channels they now have just 7 days.

Spare a thought for the person going overseas or travelling who would have noticed and have asked someone in the house to record something to watch later that they discovered would be on because DStv subscribers had access to a schedule stretching further into the future than a week in advance. No longer possible. 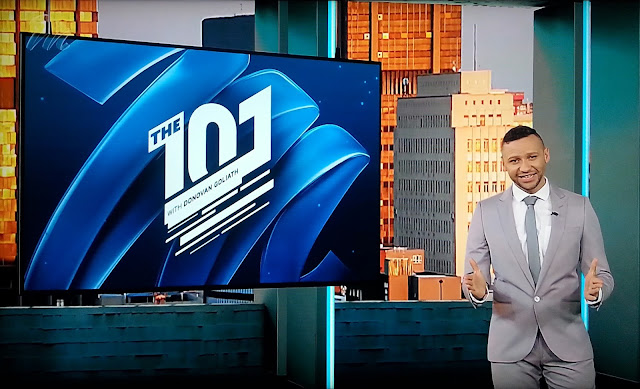 Remember The 101 with Donovan Goliath on M-Net (DStv 101) that was specifically created as a "content discovery" show to help viewers watching TV to know what's going to be showing across the various M-Net channels on DStv? Cancelled. Replaced with ... nothing.

In addition, the DStv guide online worsened with less specific information and often generic population of the same stale, non-descript one-liners repeated for every episode. That isn't "enhancing content discovery".

On Showmax and DStv Now the mess and multiple little mistakes have been more than ever during the past year. Wrong and old publicity photos, wrong show descriptions and wrong episodic information or no episode information litter the whole place. That is not "enhancing content discovery". 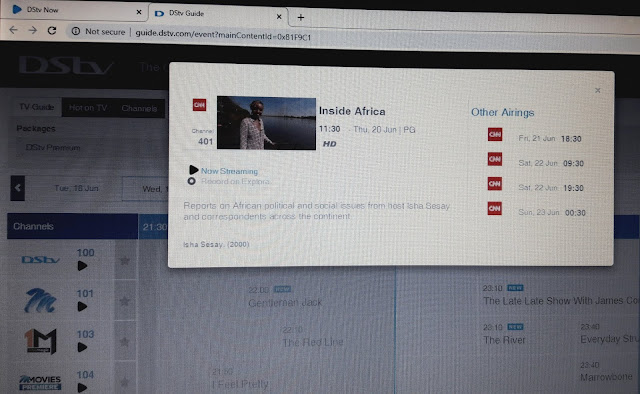 Soni Methu was fired from CNN years ago and actually died in mid-April this year.

Quite surreal MultiChoice that apparently can't care less and probably never even watched the show or the bulk of shows it leaves to viewers to "discover", still uses Soni Methu's publicity photo for Inside Africa on CNN International (DStv 401) on the DStv guide and DStv Now.

It's one of literally many, many blatant mistakes that are not fixed and that collectively hugely damages what MultiChoice wants to call "enhancing content discovery".

On social media it doesn't look as if DStv cares either.

If it did, or people running things like its Twitter actually watched shows, it again wouldn't run well past sell-by date information and repeat the same worn-out and ridiculously stale info about shows that had already come and gone. Again, that doesn't quality as "enhancing content discovery".

The truth is that DStv subscribers are less well taken care of, with access to less programming information, that are less easily available that what the case was a year ago.


ALSO READ: MultiChoice does little to stop the drop of DStv Premium subscribers other than have the call centre phone them after they had already cancelled; top-end segment still 'a long way off' from being 'unable to wash itself' and being unprofitable.
ALSO READ: TV CRITIC's NOTEBOOK. MultiChoice CEO, Calvo Mawela, has started spouting some inane gibberish about millennials not wanting or able to watch 90 minutes of something. Get a child - and get a grip.
ALSO READ: TV CRITIC's NOTEBOOK. Higher prices are not killing DStv Premium - MultiChoice's lack of showing DStv subscribers why it's worth it, constantly diluting it, and failure to add value is what's damaging it.
ALSO READ: TV CRITIC's NOTEBOOK. If you want to see some really hilarious sh*t, look no further than MultiChoice's surreal no-numbers presentation in its financial results comparing Showmax and DStv Now with rival Netflix.
ALSO READ: DStv subscribers keep increasing although MultiChoice continues to lose top-end DStv Premium customers who no longer see it as offering enough value for money.
on 11:22:00 PM