Producer Diana Lucas on Shaleen Surtie-Richards’ final time on film in new bio doc: 'An intimate talk with a woman who was an amazing person.'

by Thinus Ferreira
It's pure Shaleen Surtie-Richards as you've never ever seen her before: Through the eyes and the stories of her friends who loved her and knew her best, says producer Diana Lucas, the woman behind the biographical docufilm Shaleen: I Am Who I Am that will debut tonight, Wednesday 9 June, on M-Net and thereafter on Showmax, as well as kykNET and kykNET & Kie.
Diana Lucas Productions completed work and was literally putting the last finishing touches on the months' long docufilm - an intimate insiders' perspective on the iconic South African actress - just as news broke on Monday morning of the untimely death of Shaleen Surtie-Richards (66).
Diana Lucas describes Shaleen: I Am Who I Am as less of a documentary film and more "an intimate talk with a woman who was an amazing person".
TVwithThinus asked her about how the film came to be and got completed in time to be shown this week and how Shaleen as the subject is brought out in the film through interview and anecdotes, as Diana reveals how the filmmaker and the actress - through the process (and lot and lots of photos) - became friends. 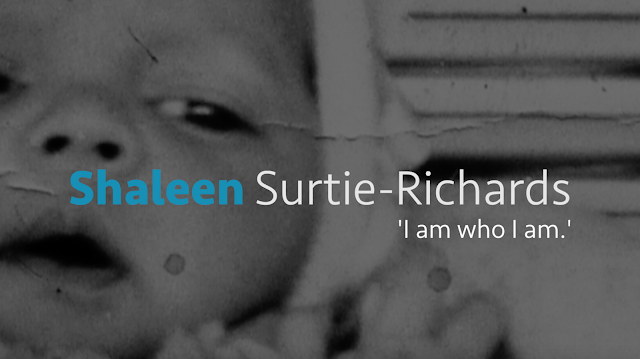 When did you start to work on Shaleen Surtie-Richards: I Am Who I Am as a documentary film?
Diana Lucas: M-Net gave me the project before the Covid-19 lockdown in 2020 and then suddenly lockdown happened. I've never met Shaleen but obviously, I've heard about her and her role as Fiela and as Nenna in Egoli.
I spent a lot of time during lockdown phoning her and she wasn't totally keen about doing it initially - she just had so many things happening. And then we slowly started talking. Around August, early September, she said, when I met her, "okay, she'd do this". So that's really when it began.
And why a film documentary about Shaleen specifically, what was the impetus for her as the subject?
Diana Lucas: M-Net wanted to do quite several documentaries about people, I know there's one about Derek Watts of Carte Blanche, there's one about Mark Shuttleworth. I think M-Net has chosen around 8 people that they thought worthy of biography-type stories.
What were you busy with when you heard about Shaleen Surtie-Richards' death on Monday?
Diana Lucas: Oh jeez, you know, I mean. I got such a shock. I was at home. And someone from M-Net was calling me and she called me again, and I just had this terrible feeling because she doesn't call me that often.
It was a terrible shock. I didn't know Shaleen but I went through a whole list of people talking about her and her career and her acting.
The most amazing thing was that not a single person that I asked - from Pieter-Dirk Uys to Marc Lottering to anyone - each and everyone said "If it's for Shaleen, I'll do it" and I don't think you often get that reaction.
Everyone said "For Shaleen - whatever. Whatever time, whatever this, for Shaleen - absolutely". It was like my own discovery of all of these incredible stories that Shaleen Surtie-Richards had in her life - many that she told me obviously, but others that just came out as people like Pedro Kruger spoke about her - just these amazing, intimate pieces about Shaleen's life.

SHALEEN SURTIE-RICHARDS: I AM WHO I AM (Trailer): Here's the teaser trailer of the new biographical docufilm about the life of actress Shaleen Surtie-Richards, as told in her own words and through those who knew her, airing on @MNet (@DStv 101) Wednesday (tonight) 9 June 7:30pm: pic.twitter.com/wlEXjG1BkT

How far to completion were you with this docufilm before she passed away on Monday?
Diana Lucas: We're just completing it now, today (Tuesday). We had sort of completed it, it was just some of the final things. You know, the most wonderful thing is that I've actually showed it to her. And Shaleen loved it.
Just before the completion, about a month ago, she came in. And you know often people don't ... and she just came in and said she loved it.
Even maybe some of the things that are - not critical but showing who is the real Shaleen and stuff - and she just said "I love it". I feel that in that way - you know, she had a healthy ego - I feel that I've made her happy.
And we'd sit and I'd found some stills and photographs in her house. I'd say "Shaleen, I'm coming for tea"  and I'd bring the cameraman and we'd sit there and she had tons - so many pictures and newspaper cuttings and she had album after album of her work and life. She was incredibly orderly actually.
You couldn't choose and she'd just sit there and tell stories and it's in that weird time that I started to feel that Shaleen is my friend.
I'm just struck by the "divine intervention" of this documentary being made and just being ready to celebrate her life just as she died.
Diana Lucas: I know! The one thing is that I got to show it to her because that would have been my worst thing ever for her to never have seen it, but she loved it, and also I feel she was excited to see it.
Her friends were going to give her a big "talk" or event. We were going to go to Cape Town and watch it with her friends.
How many hours of filming or how much footage did you amass for this film?
Diana Lucas: Weirdly enough her interview took just a day. She came and we did the makeup and that and it didn't take more than one interview.
But all of Shaleen Surtie-Richards' friends - I interviewed them for ages. At least I would say an hour each, maybe sometimes more, and about 10 people who are in the documentary who she considered close friends or people she'd worked with. 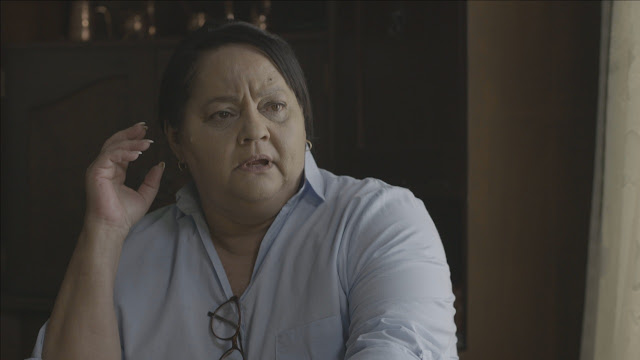 What surprised you from the content and the interviews or Shaleen herself during this process?
Diana Lucas: Actually, there's one thing that she is who she is - she's got not pretences, which is one thing she always said. But you never think that's really true.
But Shaleen Surtie-Richards really was like that. She really would just say it like it is. Specifically sitting, she'd just tell you - and I'd think wow, a bit of a shock!
But what was also funny is you see that "stage" thing. She'd be sitting looking quite "small" in the interview because she had lost quite a lot of weight. And then she'd do this dramatic sort of pose. And you'd think: "Ah, the actress". Clearly, Shaleen had that mixture of being somebody who really did relate to anyone, and said it like it was.
Shaleen Surtie-Richards did know her own worth. And she did know that she was good. And she liked to talk. She liked to talk and chat and she's really funny. I think that's what surprised me - her funniness. She's funny.
The film is on Wednesday night on M-Net, from Thursday it's available on Showmax, and on Sunday on both the kykNET and kykNET & Kie channels. Why should people make sure they watch it?
Diana Lucas: You know why? Because I've done lots of interviews and even before I started this I searched every interview of Shaleen. But in Shaleen Surtie-Richards: I Am Who I Am this is a Shaleen where some of the stories some of her fans may have heard but it's got an amazing intimacy.
It's a feeling, it's stories, and it moves quite quickly. It's not too angst-filled - it's pure Shaleen. You're sitting down and you're talking to her and it's "blerrie this and that" and I think that it's something that you'll start watching and wonder "Can I watch 90 minutes?".
Then, because you engage with her you watch it all. And it's her friends telling all of these lovely stories, and they're all in showbiz as well so it's like an insiders' view.
And you want to see the pictures - young Shaleen and some pictures where sometimes I said to myself "My goodness, is that really Shaleen?" She has a very strange way that when she was younger she could look quite old, and when she was older she could look much younger. She has a very interesting face and there are so many photos and in each one, she could look totally different.
It's not a "clever" documentary - it's more an intimate talk with a woman who was an amazing person.
Shaleen Surtie-Richards: I Am Who I Am premieres on M-Net (DStv 101) on Wednesday 9 June at 19:30 and will become available on Showmax on Thursday 10 June 2021.
It will be shown again as a simulcast on kykNET (DStv 144) and kykNET & Kie (DStv 145) on Sunday 13 June at 20:00.
ALSO READ: Shaleen Surtie-Richards on her money struggles in last TV interview: 'I just pray very hard that I won't get ill'.
ALSO READ: kykNET’s Saturday edition of Ontbytsake will be a special tribute to Shaleen Surtie-Richards: 'We tried not to cry,' says presenter Eloise Cupido.
ALSO READ: Shaleen Surtie-Richards as Arendsvlei’s Muriel: Return-story got fully filmed and wrapped last week with character that will be on screen again on kykNET & Kie from September.
ALSO READ: South Africa's TV and film industry's 'darkest secret': Why the beloved actress icon Shaleen Surtie-Richards died poor - when she didn't have to.
ALSO READ: Fiela se Kind film director Katina Heyns on Shaleen Surtie-Richards: 'She had all of us laughing the one moment, and weeping the next.'
ALSO READ: Shaleen Surtie Richards: I Am Who I Am documentary scheduled for Wednesday night on M-Net as MultiChoice's TV tribute collection of content expands after iconic actress' death - latest programming listing across channels.
ALSO READ: Shaleen Surtie-Richards' family on her death and legacy of love: She not only lived in our hearts but in the hearts of this great nation.
ALSO READ: Actress Shaleen-Surtie Richards found dead in a Cape Town guest house. She was 66.
on 11:06:00 AM