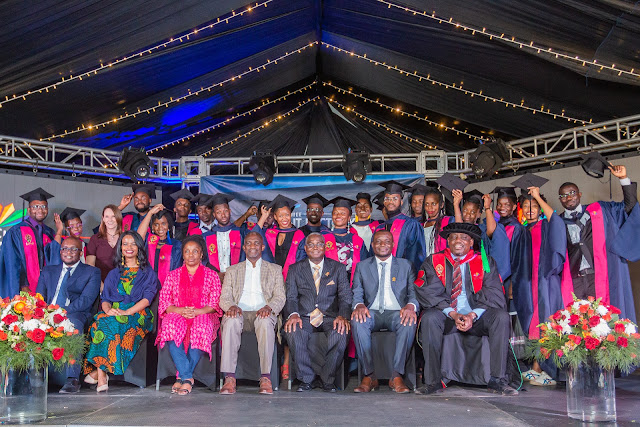 The MultiChoice Talent Factory (MTF), MultiChoice's film academy for sub-Saharan Africa held the graduation ceremony on Saturday for the academy's 20 students of the Southern Africa hub at the Zambia Institute of Mass Communication (ZAMCOM) in Lusaka, Zambia where where students received their Certificate in TV and Film accredited by the University of Zambia.

Saturday's graduation ceremony of the 20 Southern Africa students at the MultiChoice Talent Factory follows the after the one in Nairobi, Kenya for the East Africa hub, with the one in Lagos, Nigeria for the West African region that will take place on 12 September.

MultiChoice set up the MultiChoice Talent Factory last year, and modelled it on M-Net's successful Magic in Motion film academy in South Africa, with three film academy hubs in Lusaka, Nairobi and Lagos.

Along with their certificates, various students from the MultiChoice Talent Factory in Southern Africa got placements and internships with the New York Film Academy College of Visual & Performing Arts (NYFA) in New York; an Indian Film Industry "Bollywood" production internship with Nihilent Limited in India, a "Nollywood" production scriptwriting internship on an Africa Magic series produced in Lagos, placement on SuperSport productions, an infinite AVID media composer license, as well as a AVID Pro Tools license by Jasco Broadcast Solutions.

Serena Serene Mmifinyana and Nikita Mokgware from Botswana; Nobert Mapfoche and Rutendo Mahofa from Zimbabwe; Emanuel Gonçalves and Leandro Lima from Angola; as well as Gerson Amaral and Ludmila Mero from Mozambique were part of the group.

MultiChoice Africa fully sponsored the students' tuition, accommodation and stipend for the duration of 12 months during the film academy programme and they got to keep their laptops and cellphones they were given.

"The MultiChoice Talent Factory academy students have been provided with skillsets to develop their talent, connect with industry professionals and tell African stories through a comprehensive curriculum comprising theoretical knowledge and hands-on experience in cinematography, editing, audio production and storytelling," said Nyiko Shiburi, the director of MultiChoice Southern Africa Holdings.

"As a a company that is deeply rooted in Africa, we understand that many young, aspiring filmmakers have the capacity to learn and strengthen their skillset to give back to their communities but may not be financially equipped to do so."

"The MultiChoice Talent Factory focuses on making sure that those gems are nurtured, and their talent developed to contribute meaningfully to Africa’s creative industry."

The MultiChoice Talent Factory Southern Africa students produced two films, the romance drama Savannah Skies and the horror thriller The Painting that had their premiere screening including a press conference on Friday evening at the Ster-Kinekor at the Manda Hill mall in Lusaka that was attended by 200 invited guests.

Savannah Skies and The Paiting will  be broadcast on M-Net's channels in Southern Africa and will also be made available on MultiChoice's subscription video-on-demand (SVOD) video streaming service Showmax.

Throughout the past year, the MultiChoice Talent Factory has partnered with various institutions and organisations to ensure the success of the initiative who have delivered expertise in various aspects of the film and television and participated in various touchpoints of the initiatives from training at the academy to upskilling industry professionals through masterclasses.

Every year, starting with the first graduating class, one graduate from each of the three hubs will get to enhance their filmmaking skills through a scholarship. The Southern Africa class of 2018's recipient is Mainala Silondwa from Zambia who gets an 8-week internship with the NYFA.

Jonathan Kapumba from Malawi was chosen to receive a 3-week Bollywood production internship. Nikita Mokgware from Botswana was chosen for the 3 to 4-week internship on an Africa Magic series produced in Nigeria.

Two students, Nobert Mapfoche from Zimbabwe with a director position, and Emmanuel Mwape from Zambia as a producer position will be joining the SuperSport crew in Zambia after graduation.

“From its inception, the MultiChoice Talent Factory has been a place of inspiration not only to the learners graduating today, but to many that have walked into its doors and from different walks of life," said Mabvuto Sakala, Zambia's secretary in the ministry of higher education at the graduation ceremony on Saturday in his keynote address.

"This is the place where over 100 other filmmakers have gone through high-level master classes in cinematography, sound engineering, lighting and design and storytelling to enhance their skills."

"The local film industry has also been empowered to network with colleagues of like mind from across the continent through the MTF portal that is allowing real-time sharing of ideas for the creatives."