A fascinating new transgender reality series, Strut, starts tonight on Vuzu AMP - but M-Net won't show it or the new mini-series When We Rise to DStv subscribers elsewhere in Africa. 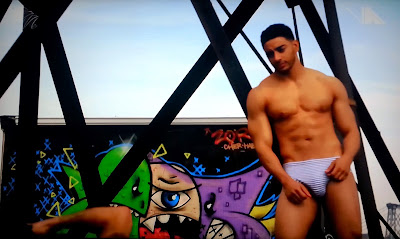 Another transgender reality TV reality series is being withheld from MultiChoice's African audiences, this time by M-Net that is showing the new series Strut on Vuzu AMP and the mini-series When We Rise on M-Net in Southern Africa but keeping it away from DStv subscribers elsewhere in Africa.

The fascinating new reality series, Strut, executive produced by Whoopi Goldberg, and described as "America's Next Top Model but with a twist" starts tonight on Vuzu AMP (DStv 103) and follows the lives of a group of transgender models.

Strut doesn't contain scenes of nudity, sex, strong language or violence and the revealing series shows the lives and challenges of transgender models like the male model Laith De La Cruz who was born female.

Strut will be shown on Vuzu AMP on DStv in South Africa and neighbouring countries as far up as Zambia.

A scan of the various online schedules of DStv in various African countries show that from Uganda, Kenya and Tanzania further upwards, including Nigeria, the Vuzu AMP version seen in those countries carry replacement content for Strut.

The same goes for the new historical documentary mini-series When We Rise, about the rise of the LGBT movement in America, currently being broadcast on M-Net. It's shown in South Africa and neighbouring countries, but not scheduled and replaced with other content on M-Net in Africa's other largest TV markets like Kenya and Nigeria.

At the time of publishing M-Net didn't yet respond to a media enquiry about why the 6-episode Strut and When We Rise isn't scheduled for broadcast elsewhere in Africa.

The blocking of Strut and When We Rise comes after several incidents of apparent censorship of specifically transgender and gay television programming in Africa.

In October 2015 the Nigerian Broadcasting Commission (NBC) ordered MultiChoice and Discovery Networks International to remove the transgender reality show I Am Jazz from the TLC Entertainment (DStv 135) channel. It affected the channel across the entire Africa, including South Africa who never got to see the show.

In May 2016 MultiChoice Nigeria forced NBCUniversal to pull all the remaining episodes of the second season of the reality show I Am Cait on E! Entertainment (DStv 124) from the channel's Africa feed, blocking viewers across the entire continent, including South Africa, from seeing it.

The show followed the life of the former Kardashian patriarch Bruce who is now known as Cait Jenner.

In July 2016 Viacom International Media Networks Africa (VIMN Africa) said its "reassuring" DStv subscribers across the African continent that it won't broadcast the episode of the animated series The Loud House on Nickelodeon (DStv 305) showing two gay dads.
on 11:31:00 AM