MultiChoice's DStv Content Showcase in Mauritius 2015: A summary of the programming upfront and news so far.

MultiChoice is having a 5 day DStv Content Showcase in Mauritius, starting today after an official opening event on Tuesday evening.

Sadly and very disappointingly so, MultiChoice couldn't be bothered in the slightest to even beforehand just tell me, or other TV critics and longtime journalists covering television, that it would be happening.

While several DStv channels on MultiChoice's pay-TV service - from Sony Television and the BBC to SuperSport, M-Net, BET, MTV Base, A+E Networks UK's History, Lifetime and many others - are presenting their latest and upcoming programming and content, I'm not able to report about it directly, comprehensively and as incisively and fully as I would have, or would have liked to.

But I will try my best as the days ahead go by, to try and bring and summarise what MultiChoice and its channel content partners are unveiling, revealing and communicating. Of course it's largely depends on it being actually reported in the first place by some of the press and media under the 200 people actually there... 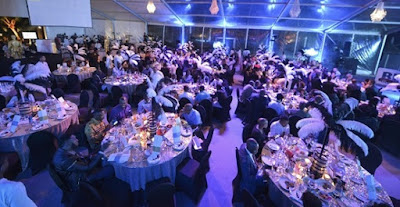 Tuesday 1 September
Nothing like some naked statues from a clothing shop at  the bread table inside the marque tent to look at, at Tuesday's gala welcoming dinner event. It's called the "Night of a Thousands Stars" - although its closer to 200 people there. The guest-list read like the "Who's who of Africa's entertainment and media".

Stephan and Lu opened the show with a cover version of Black Eyed Peas' "I've got a Feeling'. IK Osakioduwa was the host, together with Eku Edewor. Someone lost a watch.

MultiChoice Africa CEO Tim Jacobs in his opening speech says that DStv will "do all we can to make the best content available". The same story here and some more photos.

See Rita Dominic's outfit for the dinner last night! (Cause that's what why're you're flying all the way there to co and cover, right?) And then there's the trash running after Banky W to ask him when he's going to get married for a tabloid story.

African celebrities and journalists "bask at the content showcase extravaganza" according to Uganda's New Vision newspaper.

Here is someone's travelogue who forgot "what day and time it was".

Ahead of the official start there was a sightseeing tour of Mauritius and a visit to sugarcane plantations, and here's the press and guests arriving from Tanzania, Botswana, Nigeria and elsewhere at the airport. Ghana's Stonebwoy ... not drunk, just looking tired.

It's apparently Africa's biggest television content showcase - but South Africa's TV press gets shut out. For the rest of the press, Caroline Creasy, corporate affairs general manager of MultiChoice Africa says the moment you've been waiting for has finally arrived". 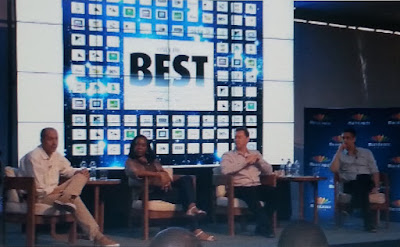 Sadly I can't cover it, although David Booth the chief content officer for MultiChoice tried to defend the indefensible - MultiChoice's repeats on DStv - saying: "A repeat is not a repeat if you haven't seen it".

Several African countries called out MultiChoice and M-Net at the panel session for the way in which Nigerian TV content is "overshadowing" other African region's content.

On why there's more Nigerian stars at the MultiChoice Content Showcase than people from other countries, M-Net says the personalities from other African countries were too busy for MultiChoice and had conflicting schedules and therefore couldn't make it to Mauritius.

With Naspers' ShowMax launching and Netflix on its way, Tim Jacobs also revealed at the press conference that MultiChoice is apparently looking at adopting some new DStv subscription models to "give greater flexibility to subscribers", given the steep rise in DStv subscription fees across Africa.

MultiChoice said ShowMax "tries to eat our lunch" and that MultiChoice has to be innovative since Naspers' ShowMax is "cannibalising" the DStv audience.

MultiChoice revealed that a kids pop-up channel from Turner Broadcasting will be added to DStv for the December holidays.

MultiChoice said that M-Net Movies and The Walt Disney Company Africa's Star Wars Channel is an experiment and that DStv will do 4 pop-up channels in 2016.

Here's the best run down of everything the panel said at the press conference.

MultiChoice is looking at the possibility and researching the option of a Sports specific DStv bouquet as well as whether offering big sport events as pay-per-view is economically viable.

On Wednesday Sony Television did a The Amazing Race Sony Spectacular Search "activation" as the marketers call it.

Viacom International Media Networks Africa (VIMN Africa) which runs channels like MTV Base and Comedy Central built a sandcastle with their activation also happening today ahead of a type of game.


Friday 4 September
On Friday the saritical TV news show Zambesi News will be in Mauritius to entertain the press MultiChoice did invite.
on 12:58:00 PM