BREAKING. A new chapter - and new capacity - for MultiChoice's DStv as the Intelsat 20 satellite is successfully launched into space. 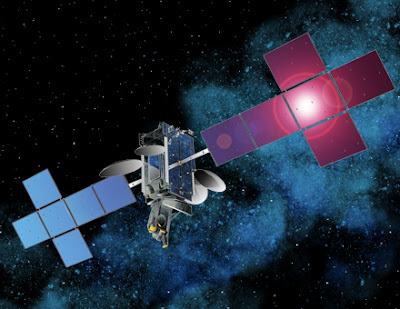 When the main rocket lifted off at 22:53 (South African time) on Thursday night from Arianespace's French Guiana's Space Center, a new chapter started for MultiChoice, finally getting more direct-to-home (DTH) satellite pay TV capacity with the successful launch of Intelsat 20.

The main rocket with the DStv logo and the South African flag proudly on the side, lifted off as scheduled from the Guiana's Space Center in South America, taking the geostationary communications satellite Intelsat 20, or IS-20, to orbit - and with it the promise of much more TV channels, much more high definition (HD) TV channels, and more sound and video services for South African TV viewers in the near future.

"Everything's normal," announced ground control at Guiana Space Center after the successful launch of IS-20, although everything about this new communications satellite it is actually extraordinary.

Not only is Intelsat 20 in fact Intelsat's most powerful satellite ever, the IS-20 is also Africa's largest DTH platform ever. The IS-20 has also been built to serve and be operational for 24 years - a record period. Its deployment bring a much-needed, and previously secured, capacity boost for MultiChoice which has run out of available satellite broadband capacity.

As the most powerful satellite in the Intelsat fleet, all of MultiChoice's existing services - with the pay TV platform currently using Intelsat 10 and Intelsat 7 for DStv - will be migrated to the IS-20. Besides moving over the existing services, there's in addition also more brand-new capacity.

The successful launch of the IS-20 comes just in time for MultiChoice which has been running low on available satellite bandwidth and had to work and utilize with discretion its remaining satellite capacity.

High definition channel roll-out had to be slow for the pay TV operator, just as the possibility, application and demand for interactive services  and more TV channels are mushrooming - together with the fast growth and uptake of DStv by pay TV consumers in South Africa and across the continent who want, and are willing to pay, for more and better television.

The new satellite capacity makes that possible. With the increased capacity DStv subscribers can expect a better alignment of the service, in time, to more closely emulate the operations and services of satellite pay TV operators in comparable countries and markets such as Australia and Britain. MultiChoice has done well in the way the pay TV platform has utilised its existing capacity up until now in terms of content-mix and pacing; new capacity will allow it to enhance its offering even further.

At the subscriber-end in terms of consumer interface a new "channel shuffle" or regrouping and realignment of TV channels available on DStv should take place to create new "space" and wider number blocks before new channels and simulcast high definition channels - thanks to the new satellite capacity - are added.

After the addition of Discovery HD Showcase MultiChoice will not again add another permanent HD bespoke channel and will concentrate on populating its new available channel realm with  "upgraded" concurrently-run HD versions of existing channels where HD channels are possible added over time.
on 11:56:00 PM