BREAKING. Is the eNews Channel changing its name when it changes its look, to simply the ENC or ENCA?

I can exclusively break the news that the News Channel (DStv 403) is considering changing the 24 hour South African TV news channel's name to simply an abbreviation - either ENC or ENCA - at least according to what insiders are telling me, when the eNews Channel unveils and launches its new look soon.

The eNews Channel also plans to launch its new online website at www.enca.com before the end of the year.

e.tv which I asked about it all and the possible name change more than 24 hours ago, didn't respond to my media enquiry.

In May I broke the news RIGHT HERE that the eNews Channel is working on a new on-air look and logo althought the colour scheme of black, white and blue would likely remain. Preliminary ideas first surfaced in April.

In July last year I broke the news RIGHT HERE that e.tv and the eNews Channel are ready to start an online presence and an online news division and expanding the eNews Channel into cyberspace. The plan is to present news online similar to the way Sky News and other 24 hour news channels such as CNN do. 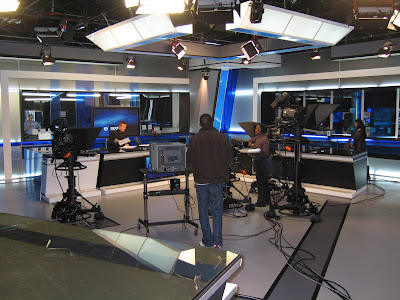 All of this is now coming together at www.enca.com - standing for the eNews Channel and what will be its new website. The www.enewschannel.co.za which also previously only redirected to e.tv's normal website is now also active.

"The rebranding is underway," a source told me yesterday. Another said: "It won't be the eNews Channel anymore but ENC or ENCA which stands for eNews Channel Africa. At least that is what people are saying."

Meanwhile the eNews Channel has also been having dealings with the British broadcasting regulator, Ofcom, I was alerted by a source. It seems that the eNews Channel as ENC Africa or ENCA has been granted a licence to broadcast within the United Kingdom. Is e.Sat, e.tv and the eNews Channel planning to expand their local news channel into Britain as a TV channel where only a daily news shows has so far been seen?

I asked e.tv and the eNews Channel about this separate development last week. "We've been broadcasting into the United Kingdom for months on TAC, and all other options where we have been seeking distribution are not finalised," Patrick Conroy, the eNews Channel head told TV with Thinus in a statement.
on 2:45:00 PM