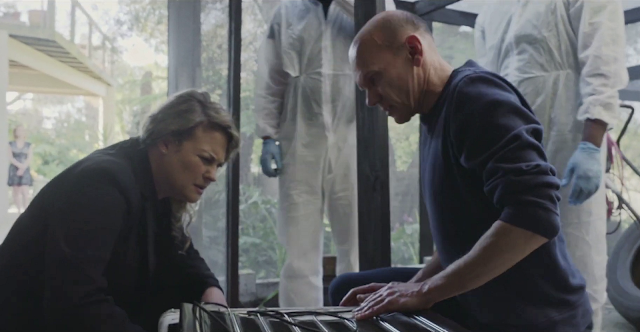 kykNET that is celebrating its 20th anniversary today will be broadcasting three drama series from January 2020: The second season of Die Byl, the third season of Sara se Geheim, as well as a new missing persons crime drama, Projek Dina.

The second season of Die Byl which was produced in association with MultiChoice’s video streaming service Showmax and that was already made available on it, will start on kykNET (DStv 144) on Sunday, 5 January at 20:00.

Projek Dina will start on Tuesday 14 January, followed by the third season of Sara se Geheim from Thursday 16 January at 20:00. Each season of the three series will have 13 episodes and be on air until early April 2020.

Ellie Bonthuys (Barbara Marié Immelman) has bid her days as a sensationalist journalist farewell, and is now a spokesperson for the South African police, while the team’s offices, the interrogation room and the laboratory has undergone a revamp.

Carien van der Bijl (Rolanda Marais), Byl’s ex-wife, also makes an unexpected appearance. In the second season of Die Byl, once more there is a series of cases, one in every episode, which has to be solved, but this time there are also a few narrative through-lines to keep viewers hooked.

Byl gets emotionally and physically confronted, with increasing frequency, when his team becomes the target of a series of inexplicable and disturbing events.

More secrets with Sara
A rebroadcast of the second season of Sara se Geheim will start on kykNET&kie (DStv 145) on Sunday 15 December at 20:00 with the third season, set in Athlone and Durbanville in Cape Town once again returning to the life of Sara Abrahams (June van Merch) who has been keeping a secret for decades in order to save the life of her eldest son (Johan, or rather Johnny).

At  the end of the second season Maggie accidentally shot her son Kelvin (Conway October), and not long before that, Maggie and her sister Lizzie (Qanita Adams) discovered that their mother Sara had been keeping a secret from them for years: Their brother, Johnny (Dawid Minnaar), is alive.

The third season will continue where the second left off.

Maggie’s ex, Ricky (Brendon Daniels), has appeared and told her eldest son, Aiden (Marlo Minnar), that he is his real father.

Ebert (André Weideman) is in mourning over the death of his wife and feels guilty that he assisted her in committing suicide – to such a degree that he starts losing touch with reality.

Aiden and Inge (Lize-Marié Richardson) still have feelings for each other, despite the misgivings of their families. But will Aiden be able to focus on a relationship, when his family is on the brink of falling apart.

The third season will branch out to include Tant Marie’s (Margot Luyt) farm in Stellenbosch, as well as to the Elgin valley for pastor Benjamin (Keeno-Lee Hector) and Lizzie’s honeymoon.

But will Lizzie be able to enjoy her honeymoon when she finds out that her nephew has been shot? And will Sara survive the news that her daughter shot her grandson? Now she is faced with a massive dilemma – should she protect her child by helping her to hide or should she hand her over to the police?

The rapid response task force tries to curb the rapidly growing number of missing persons in South Africa, which is fast becoming a nearly impossible task.

Team leader, Captain Deon Visagie (Tim Theron), is a strategist and sleuth by nature. He obsesses over the smallest detail, but his capacity for reading people falls miserably short. He has particular trouble with sergeant Lux Dladla’s (Chumani Pan) approach to detective work, which relies strongly on intuition and the ability to build and utilise a large network of contacts.

The task force enlists the help of ’n non-official informant, the talented and efficient hacker, Charlene “Charlie” Botha (Kay Smith). However, even Charlie soon realises that these cases place her in more danger than she ever could have expected.

Deputy Officer Ronel Oosthuizen (Chanelle de Jager) is the one that keeps the team together. She is an honest, hard-working, family-oriented person, but certainly not one to be trifled with. She doesn’t abide trivialities and often gets stuck in the middle when Deon en Lux butt heads, but knows exactly how to handle them.

She is also the one that dubs the task team “Projek Dina”.

Projek Dina is inspired by true stories and was developed from the combined knowledge of Van der Watt, Rheeder and Van Aswegen.