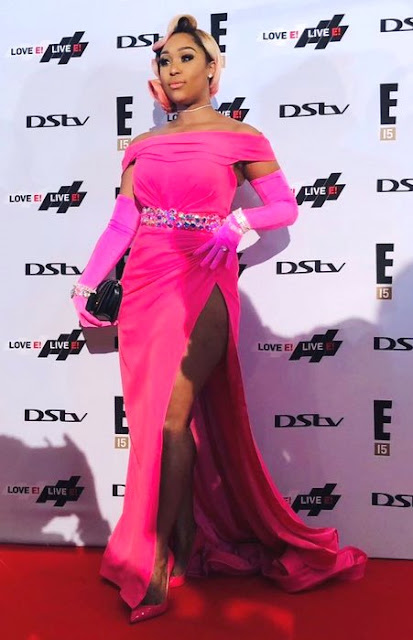 The South African celebrities Bonang Matheba, Minnie Dlamini and Lasizwe Dambuza (who forgot to put on pants) got slammed, while Nomzamo Mbatha and social media influencer Aisha Baker garnered praise, over their respective red carpet fashion choices at Thursday night's E! Africa party to celebrate the 15th anniversary of the presence of the entertainment channel from NBCUniversal International Networks in South Africa and Africa.

Bonang Matheba, Lasizwe Dambusa in a white "man-tard" without pants, and Minnie Dlamini in a Marilyn Monroe inspired, head-to-toe pink look from fashion designer Gert-Johan Coetzee, were all panned on social media for their red carpet couture choices.

Minnie is dressed like a doll from Shoprite I'm not okay guys
— Orca Ninjas (@PrettyBoyMweza) April 11, 2019

5. Minenhle Jones:
I HATE THIS LOOK.
She looks like she just flew in from Minnie Mouse’s Tea Party in Disneyland. Nice shoes though. pic.twitter.com/jJpTuZIo8Y
— Ray R* Kamolane (@Ray_Kamolane) April 11, 2019


Bonang Matheba, meanwhile, in Villiotti Fashion, was criticised for looking like she was repeating an outfit and for not trying hard enough.


I have seen Bonang in that similar dress before, i expected more FASHION from her, I'm disappointed #15YearsOfE
— kgabo Shilabjwe (@kgabo_shilabjwe) April 11, 2019


The worst-dressed of the evening on the E! Africa red carpet was Lasizwe Dambuza.


My winner of the night of the #15YearsOfE in Africa celebration is @NomzamoMbatha. Beautifully dressed with so much poise, she was The Best and Nicest to media on our other end of the rope line BY FAR. Made time for Every media with The Best, & most eloquent answers.#LoveELiveE pic.twitter.com/CKkbppxV1i
— TVwithThinus (@TVwithThinus) April 12, 2019


ALSO READ: REVIEW. E!'s 15th birthday party in South Africa was fine and looked beautiful but with too many 'standing-room only' guests while TV execs hid away in their roped-off alcoves, it felt more college-years nightclub night than big celebration.
ALSO READ: TV CRITIC's NOTEBOOK. As E! marks 15 years in South Africa as a TV channel on DStv, here are 15 things that E! brought into my life that I'm thankful for.
ALSO READ: TV CRITIC's NOTEBOOK. At E!'s 15th Africa anniversary party, I tried to ask ProVerb just one question - and then something happened that made me think about what's reasonable to expect from TV stars who decide to be on the red carpet.
ALSO READ: IN IMAGES. 37 photos from inside E!'s party to celebrate 15 years of the channel from NBCUniversal International Networks in South Africa and Africa on MultiChoice's DStv.
ALSO READ: MultiChoice content boss, Aletta Alberts, on 15 years of E! from NBCUniversal International Networks on DStv: 'Africans will continue to be part of the E! story'.
ALSO READ: E! unveils a new E! Africa TV commercial to celebrate its presence of 15 years on the continent; 'it was like a proper film set,' says Roxy Burger.
ALSO READ: E! in Africa announces the recipients of its first-ever E! Africa Pop Culture Awards in 2019.
ALSO READ: NBCUniversal International Networks celebrating E!'s 15th anniversary in South Africa and Africa with a celebration party and the first-ever E! Africa Pop Culture Awards.
ALSO READ: E! commissions new 10-episode show, Celebrity Game Night, produced by Rapid Blue, as its next localised African series; production starting July for broadcast in late-2019.