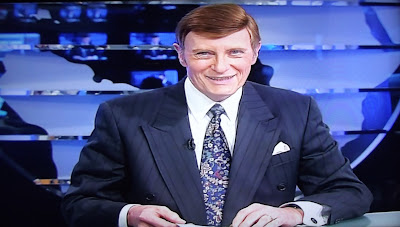 Riaan Cruywagen attended a special brunch this morning in Sandton to thank him for this decades long contribution and to bid him farewell.

Riaan Cruywagen read his final news bulletin this evening on SABC2 in the Nuus om 7, ending his illustrious career as the person holding an unequaled and unrivaled record as the South African TV personality who've been on television the longest.

He read his last bulletin exactly 37 years after he first started in 1976 with the advent of television news in South Africa.

At the farewell brunch (which South Africa's national TV critics and journalists who cover television based outside of Johannesburg were not bothered to be told of, nor been invited to) the SABC presented Riaan Cruywagen with a special plaque.

Prof. Pippa Green, SABC board member said: "Riaan thank you for all of your years of loyalty, support and service to a public broadcaster which is not always the easiest place to be but is probably one of the most important places."

Hlaudi Motsoeneng, the SABC's acting chief operating officer (COO) said: "I think you have done a wonderful job for the SABC. The way you dress, the way you talk to people - you're a human being. You lead by example."

Jimi Matthews, the acting head of news and current affairs at the SABC said: "I think the Afrikaans community must be quite 'change fatigued'. If you think of how the country has changed in the last 20 years. But the one thing which has remained constant - one thing significant thing that's remained constant in their lives is Riaan Cruywagen. They know that when they switch on the TV to watch the news, there is Riaan Cruywagen to assure them that everything is fine. And now we're going to have to get used to South African television news without Riaan Cruywagen. And it's quite a strange notion; quite a strange feeling actually."

"His contribution to broadcasting, not only to the SABC, but to broadcasting in general has been immense. Riaan's legacy is the news room will always be his commitment to his craft, his dedication, his professionalism. And for me I think it was a huge honour to work alongside someone like Riaan," said Jimi Matthews.

Kenneth Makatees, the executive director for Afrikaans TV news on SABC2 said: "Riaan is one of those South Africans who really crossed borders in this country."

Sandy Macdonald, the editor for Afrikaans TV news on SABC2 said: "I think he played an enormous role to make Afrikaans cool again."

Peet van Staden, the executive producer for Afrikaans TV news on SABC2 said: "He has the exceptional capacity to remain calm under pressure, maybe more so than anybody else. He also has the ability to laugh and to be freaked out."

Bessie Tugwana, SABC2 channel head, said: "For SABC2 I want to express our pride and profound gratitude that he has stayed this long. And not just staying long, he has brought professionalism to the news reading and some kind of believability."

"As you know there are three bulletins at 19:00, every day except weekends. Those bulletins are English on SABC3, English on e.tv, but the Afrikaans bulletin has always attracted more audiences. That for us is testimony that he sustained that in his community. I think as a channel he has also given the channel, the brand SABC2, credibility," said Bessie Tugwana.

Chriselda Lewis, SABC TV reporter said: "Riaan keeps looking the same way that he did so many yers ago. I still need to find out how he achieved that. He doesn't have any gray hair. When you try and look for wrinkles on his face you can barely find them."

"He appeals to so many people across the colour line," said Chriselda Lewis. "That is just amazing."

"I always remained a career broadcaster," said Riaan Cruywagen at the brunch. "No matter who was in charge of government or at the SABC, I remained true to my profession and nothing else. I never became involved in politics - neither external nor internal - and I made it my duty to present the news in an unbiased, non-partisan and objective, credible and authoritative way."

"Tonight, after 37 years, I say goodbye to South Africa. I have really mixed feelings. I'll miss the news reader  role I've fulfilled for so many years, very much. But I have the greatest and indescribable appreciation for the kindness so many viewers allowed me to bring the news every evening into their living rooms. Over the past few weeks I have received hundreds of emails from viewers wishing me the very best with my retirement."

I want to remind viewers that nobody's perfect; nobody's irreplaceable. I'd appreciate it immensely if you'd give my successors and my colleagues who are currently still there, Karlien and Terence, all the support you gave me. Let's work together as South Africa's to make this beautiful country of ours the best in the world," said Riaan Cruywagen.