Russia Today channel back on South African television after China's StarTimes Media adds it to StarSat. 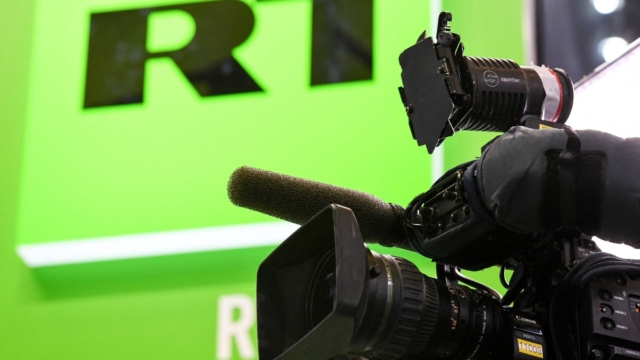 by Thinus Ferreira
Russia's state-sponsored TV channel Russia Today (RT) is back on South African television after China's StarTimes has suddenly picked up the channel despite international sanctions, with RT which is now available on StarSat on channel 260.
Russia Today has been widely criticised for its one-sided coverage of Russia's war with Ukraine. Observers have been faulting RT for presenting information as so-called news reporting although it's not factual or not fact-based.
Russia Today, which was carried on MultiChoice's DStv satellite pay-TV service, abruptly went dark on 2 March shortly after the start of Russia's invasion of Ukraine and the war with its neighbouring country, resulting in a flurry of international sanctions and trade restrictions imposed against Russia.
Trade sanctions imposed by the European Union (EU) saw Russia Today's satellite uplinking - a channel feed connection making use of European companies for transponder uplinking - cut off at the same time that Google and other companies blocked the propaganda channel's YouTube streaming.
For the past two months, MultiChoice has been showing DStv subscribers a title card on DStv channel 407 explaining how the EU blocking of Russia Today means that the RT signal is not available through Intelsat's IS-20 satellite transponder that MultiChoice is using and leasing space on. 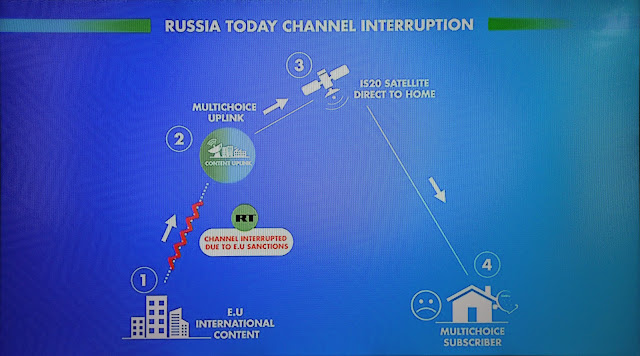 China's StarTimes Media, operating as StarSat in South Africa, confirmed to TVwithThinus that it has acquired Russia Today and is now showing it on StarSat channel 260.
StarTimes says it's uplinking the Russia Today channel feed through SES S.A.'s SES-5 satellite transponder on which StarTimes/StarSat is leasing space for South and Southern Africa.
Similar to Intelsat which has its corporate headquarters in Luxembourg, SES S.A. is a satellite and terrestrial telecommunications network provider also based in Luxembourg in Europe.
StarSat tells TVwithThinus in response to a media query it got TV channel application permission from South Africa's broadcasting regulator the Independent Communications Authority of South Africa (ICASA) to add Russia Today.
"We have received ICASA's approval on 10 May, therefore we launched this channel from 11 May 2022 and it's available in our Super package from R109 per month on channel 260".
Asked why it decided to add RT, a StarSat spokesperson says "StarSat as a platform takes pride in sourcing relevant and current content to enhance our packages, thus we regard RT Global as a 24-hour English-language news channel that focuses on all major economic, political and social issues of our time. RT is broadcast on the StarTimes platform in South Africa and the rest of Africa".
Asked how StarSat is able to show Russia Today although it was removed from transponder uplinking due to EU sanctions, StarSat says "After we reached a carriage agreement with RT, they deliver the feed to our uplinking station straightly, then we uplink to SES-5 and broadcast to our customers".
I've reached out to SES. S.A. with a media query on Thursday but didn't get a response by the time of publication which will be added here if received.
I've also reached out to ICASA about the approval process and a response will be added here if received.
In the United Kingdom where Russia Today was removed in March as well, the British broadcasting regulator Ofcom revoked RT's licence and said the channel is unable to comply with the impartiality rules of the UK's Broadcasting Code.
After 29 investigations, Ofcom said "RT is not fit and proper to hold a licence in the UK".
Last month Bloomberg reported that China's vice foreign minister Le Yucheng said that China will continue strengthening strategic ties with Russia despite Russia's widely-condemned war with Ukraine.
ALSO READ: The Russia Today TV channel abruptly disappears on Wednesday evening from MultiChoice's DStv, and TelkomONE in South Africa.
on 11:53:00 AM