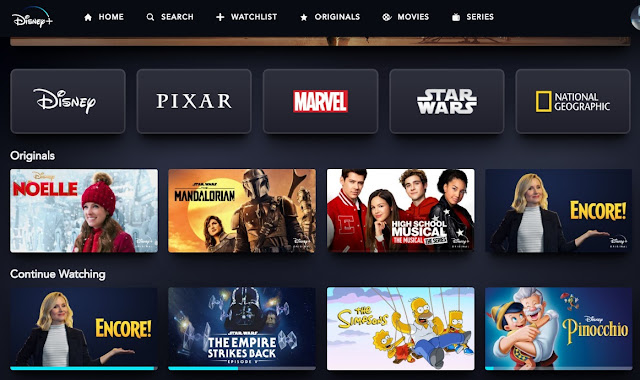 by Thinus Ferreira
Disney+ will launch on 18 May in South Africa and cost R119 per month, or R1 190 per year - a month earlier than what Disney+ was expected to arrive in South Africa.
At R119 per month, Disney+, entering South Africa behind MultiChoice's Showmax, Netflix SA, Amazon Prime Video, Apple TV+ and others, are cheaper than Netflix's R159 per month, but pricier than Showmax's R99 per month and Amazon Prime Video's R87 per month.
Disney+ offers up to four concurrent streams, unlimited downloads on up to 10 devices, and the ability to set up to 7 different profiles, including the ability for parents to set Kids Profiles that have an easy-to-navigate, child-friendly interface to access age-appropriate content.
The Disney+ interface has various "tiles", grouping content under Disney, Pixar, Marvel, Star Wars, National Geographic and general entertainment from Star.
The arrival of Disney+ on 18 May will definitely add further oil on the fire of the heated race under over-the-top (OTT) direct-to-consumer streaming services in the South African market, with a big pent-up demand under consumers who have wanted to get access to Disney+ and content ranging from Star Wars: The Mandalorian to the recent The Book of Boba Fett series.
At R119 per month in South Africa, Disney+ will cost the same as in the United States with only a few countries like Brazil, India and Argentina getting Disney+ for cheaper.
At its R119 price, Disney isn't giving any kind of "introductory" cheaper offer as a late-comer to the South African market for consumers - which was actually expected - but is coming in below the psychological threshold of R130 which was also expected.
Disney+ will be cheaper for South Africans than in New Zealand (R121), Australia (R132) and the United Kingdom (R153).
on 8:36:00 AM