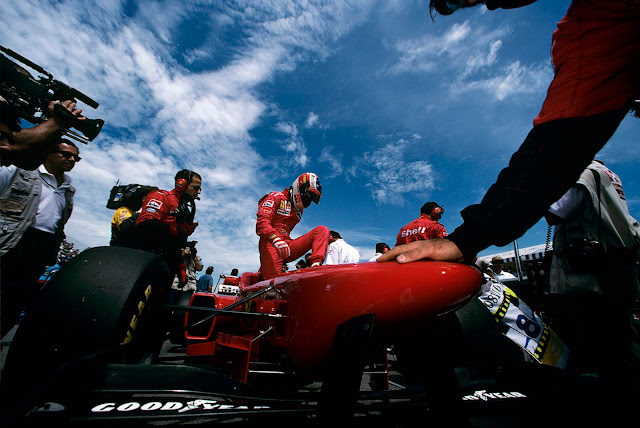 by Thinus Ferreira
Netflix has acquired the worldwide rights to Schumacher, a feature-length documentary about the legendary Formula One racer Michael Schumacher that the video streaming service will release on 15 September, featuring interviews with the driver's family, and prominent figures in motor racing.
The Formula One racer's career was cut short when, after being hailed as the greatest Formula One driver of all time following 91 race victories and seven world championships, Michael Schumacher suffered a severe brain injury after a skiing accident in 2013. He has since been in recovery.
Schumacher, produced by Benjamin Seikel and Vanessa Nöcker from B|14 FILM GmbH and with Hanns-Bruno Kammertöns, Vanessa Nöcker and Michael Wech as directors, features interviews with Michael Schumacher's family - including his wife Corrina, father and brother, as well as the couple's two children, Gina and Mick Schumacher.
The documentary also talks to prominent figures of the motorsport world, including past peers and opponents such as Jean Todt, Bernie Ecclestone, Sebastian Vettel, Mika Häkkinen, Damon Hill, Flavio Briatore and David Coulthard.
"Michael Schumacher has redefined the professional image of a racing driver and has set new standards. In his quest for perfection, he spared neither himself nor his team, driving them to the greatest successes," says Sabine Kehm.

"He is admired all over the world for his leadership qualities. He found the strength for this task and the balance to recharge at home, with his family, whom he loves idolatrously. In order to preserve his private sphere as a source of strength, he has always rigorously and consistently separated his private from his public life."

"This film tells of both worlds. It is his family's gift to their beloved husband and father."

Benjamin Seikel, producer, says "The documentary was a big challenge and needed a lot of time and sensitivity, considering the pressure that was put on the production from the outside. But thanks to a great team and a really great collaboration with the family, we didn't let ourselves get rattled."

"We're grateful that it's finally getting underway and excited about its global release on Netflix. The film was always intended to be an international documentary and we're confident it will be embraced as such."

Vanessa Nöcker, producer and director, says "The greatest challenge for the directors was certainly to find the balance between independent reporting and consideration for the family".
"Corinna Schumacher herself was our greatest support in this. She herself wanted to make an authentic film, to show Michael as he is, with all his ups and downs, without any sugarcoating."
"She was great and brave enough to let us do what we wanted, and so we respected and kept her boundaries. A very inspiring, warm woman who made a lasting impression on all of us."
Kai Finke, director for the Europe Middle East and Africa (EMEA) TV licensing division at Netflix, says "This deeply personal portrait of Michael Schumacher will inspire and touch his fans that followed his career, and introduce this iconic personality to our members worldwide who may not be familiar with the star’s huge Formula 1 accolades".
The Londen-based Rocket Science is representing sales and distribution of the film worldwide and facilitated the partnership with Netflix.
on 12:38:00 PM