INTERVIEW. Filmmaker Rick Kirkman on his Surviving Joe Exotic TV special on Investigation Discovery: 'I had much worse video and a whole lot worse things occurred at the zoo that never made it to air.' 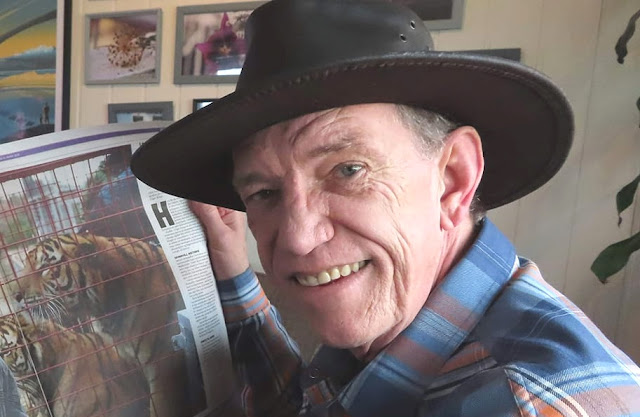 The filmmaker Rick Kirkham, the former producer of a reality series for the eccentric and now jailed Joe Exotic, is speaking out in a brand-new must-see TV special, Surviving Joe Exotic, coming to Investigation Discovery (DStv 171) on 11 June and says viewers will now get the chance to find out how it was that he got chosen to enter the zoo where his life turned into hell and how he tried to tell the "Tiger King" story.

Earlier this year the Tiger King documentary series had people stare in disbelief at the true-life tale of Joe Exotic - a series that includes Rick Kirkham as a former producer who was making his own show about Joe Exotic who ended up losing his footage in an arson fire after a fallout with the Tiger King.

In the new special Surviving Joe Exotic coming to Investigation Discovery (DStv 171) on 11 June at 21:50 viewers will see Rick Kirkham, who now lives in Norway, open up about how it all came to be and what has happened in his life since.

TVwithThinus got on the phone to Norway and spoke with Rick Kirkham about Surviving Joe Exotic and the surreal story he became part of.


What will viewers see in this Surviving Joe Exotic documentary on Investigation Discovery?
Rick Kirkham: I wouldn't call Surviving Joe Exotic a documentary, it's more a story of who I am and how I ended up going through this and how I became part of Joe Exotic's life.
What viewers are going to see is how I live my life now after having survived G.W. Zoo and survived not only that, but survived the making of and the airing of the Tiger King series itself. I've been through a lot of hell since that series came out because of the number of people who wanted to interview me and wanted to get to know me.


And would you say you sort of feared for your life afterwards or is that not one of the concerns?
Rick Kirkham: No, no. I have not feared for myself in any way. Joe Exotic is in jail where he belongs and the thing I more fear is the intrusion because of the number of journalists who had come here to Bodø in Norway where I live, trying to get interviews. It's been kind of nuts.


When did you realise that your life has changed because of Joe Exotic and Tiger King?
Rick Kirkham: I realised about an hour after the documentary started airing in California on the premiere night.
My phone here in Norway started ringing off the hook, my email addresses - all 3 of them, my Facebook messages started filling up from people wanting to ask me "is this real?" and "Hey, are you Rick?" and on and on.
Immediately I started doing interviews with some of the legitimate TV and newspaper journalists. The main thing was that the nightmares for me started coming back because everybody day and night was Joe Exotic related. The nightmares started coming back.
Within a couple weeks of the Netflix debut of Tiger King I had to start seeing a therapist again, and I'm still seeing that therapist now to help deal with all of this attention. You have to remember that Tiger King is all about Joe Exotic, not Rick Kirkham.
Joe Exotic happens to be stuck in prison for the next 22 years, so who is the next person to get the attention? Rick Kirkham. So it's the luck of the draw that while the series came out and did a good job, I'm the one who has the responsibility now of being here for it.


It's quite a while back but I'm wondering, during the filming of what was your show, when did you - being around Joe Exotic - did you realise that Joe wasn't quite the person that he appeared to be? And what did you think at the time because you kept filming but you started to have reservations about him?
Rick Kirkham: There was a specific moment. There came a point when I was shooting a reality TV series at the zoo and about three months into it I had my crew build a caged throne - an actual big chair - made out of solid wood and red velvet and I started telling Joe that we'll call you the Tiger King, that "you're the king of the tigers".
Anyway, we built this throne and we put it out into the middle of a big cage with real tigers running around and have him sitting in it and standing up and draw his gun and saying "Hi, I'm Joe Exotic, I'm the Tiger King". And it went to his head.
After that day he was not the same person. All of a sudden in his head he thought he was the king of tigers; that he could get away with anything and that he didn't have to hide any of the abuse anymore, he didn't have to hide the fact that he was an asshole.
Building that throne and putting him on it - you can imagine, if somebody gives you a king's throne and you sit down and then a trumpet blares - "ta-ta-ra-daa" - it went to his head. 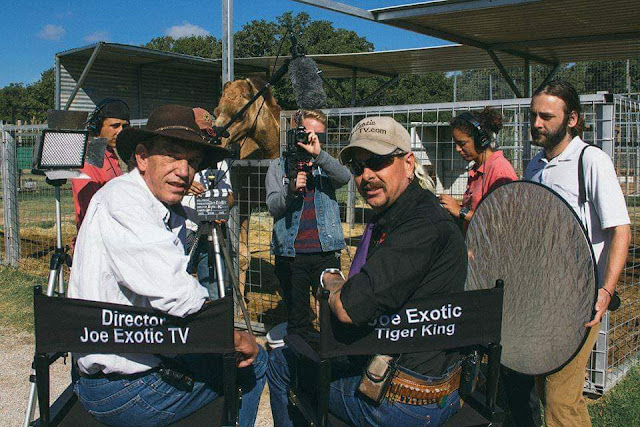 What will you talk about in Surviving Joe Exotic? Why should people make sure they watch it?
Rick Kirkham: Surviving Joe Exotic is really a story about my reaction - what I went through making it.
It also tells more of a story of how I came to go there in the first place, who I was before I went to the zoo, and why I was the person to take the job to film at the zoo.
If you want to know the story of how it is that Rick Kirkham himself came to be at the zoo - which is a story in itself - this special will tell you.
It also goes on to tell you what it's been like going through all the therapy I've gone through after having worked at the zoo; after having had the Tiger King series come out; the fact that I'm still seeing a therapist.
Surviving Joe Exotic will give you an idea of who I am instead of just Tiger King's Rick. Viewers can find out how it was that Rick got chosen and was willing to go into the zoo and who was the person who was chosen to tell the Tiger King story.


Wherever you are now in the Nordics, how was that adjustment moving there, and can you see yourself moving back to the United States or elsewhere in the future?
Rick Kirkham: I now live in a town called Bodø in Norway, it's in northern Norway, we are in the Arctic Circle and I'm from Texas, so obviously this is a very different place than Texas.
In Texas right now it's probably 85 to 95 ºF (29 °C) while here we're sitting at the beginning of summer and it's probably 45 ºF (7 °C), so a very different place. We don't get snow in Texas. We get a lot of snow in northern Norway.
I came here for one reason and one reason alone: Yes, I wanted to get away from America, I wanted to get away from Texas and Oklahoma where that zoo was, but more than that I had a girlfriend online that I've had for 10 years prior to that and I decided to come here and marry her. And that's exactly what I did.
So I came to Bodø and told her "I'm marrying you" and that was 2 years ago and I couldn't be more happy - we're soulmates.
Living in Scandinavia is a wonderful place, I love it. I don't like the weather necessarily but the people are wonderful and quite honestly, living in America right now at this moment in time isn't the best place to be these days for political reasons.
I'm very anti-Trump and I don't like what's happening in my country right now so I'm just happy to stay right here. Will I ever go back to America? I'll go back to visit but I will live and die in Bodø.


Part of the fascination with Joe Exotic I think is also because everything feels so surreal but it's not made up but people struggle to believe it. How would you describe, having more perspective now, how do you look back at this surreal story that you became part of as you tried to document it?
Rick Kirkham: You know, if somebody had written a book called Joe Exotic: Tiger King, nobody would have believed it. You just wouldn't have believed it.
The very fact that Netflix was able to get enough of the video that we had put online or we had in the cloud and actually show you that this is real, that is the only reason people believe it.
And let me be honest with you, I had much worse video and much crazier video and events on tape of Joe Exotic than what we could ever have dreamt about and that people can't see because it burnt in the fire.
So if you think that the Netflix Tiger King series was stunning, that's nothing compared to really went on. There was a whole lot more and a whole lot worse things that occurred at the zoo that never made it to air simply because there was no video. And who would have believed this series if it were just a book? Nobody.


Have you maybe thought of what you want to do next as a filmmaker?
Rick Kirkham: I don't know.
I'm so confused over what I've gone through. I've been going day and night - and in my dreams even - and seeing a therapist over Joe Exotic for 6 months now.
I'm not sure what I want to do next. I will obviously do a documentary of some sort. But it will probably be looking back and taking and creating a sequel to my original film, TV Junkie, that was about my life in 2006.