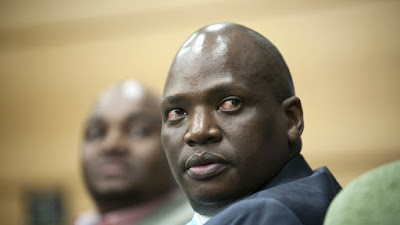 The SABC has fired the guilty Hlaudi Motsoeneng after a disciplinary hearing found the former chief operating officer (COO) of the beleaguered South African public broadcaster guilty on all charges, including bringing the SABC into disrepute and causing irreparable damage to the SABC.

The SABC on Monday morning called another hastily arranged press conference set for 15:00 on Monday afternoon that eventually started at 15:42 - late as all SABC press briefings the past year and a half.

Advocate Nazeer Cassim who chaired the disciplinary hearing, handed his judgment to the SABC on Monday morning.

SABC chairperson Khanyisile Kweyama at Monday afternoon's press conference that was carried as a live broadcast on eNCA (DStv 403), SABC News (DStv 404) and ANN7 (DStv 405), addressed and took some questions from a group of journalists from various media outlets as well as several SABC journalists.

Some more SABC News journalists and staffers stood at the wall, intently listening to everything being said.

In all, less media and press attended the hastily called presser than in the past.

She revealed that the SABC has canned the controversial Gupta-owned The New Age Breakfast Briefings broadcast on SABC2 with the one this past Friday, 9 June that was the last one.

She said that the last of the controversial The New Age Breakfast briefings broadcast on SABC2 during Morning Live was held on Friday and that the SABC is working to extract itself from the contract.

On Hlaudi Motsoeneng's imposed SABC News censorship and ban on using visuals on SABC TV News bulletins or live coverage of destruction of property she said that " the ban on the use of violent visuals have been rescinded. Journalists may use footage as they see fit".

On the controversial 90% local content quota that decimated SABC radio listenership and TV viewership, especially SABC3, and called "90 10" [ninety-ten], Khanyilise Kweyama said "the SABC interim board is not anti-transformation".

"90/10 was a bit drastic. 90/10 has been a source of revenue loss if implemented across all [SABC] platform. There are certain channels that are quite high that have achieved 80%, and we are therefore not going to say to those channels regress to 50%".

"When they have achieved and they are breaking even, and they are making the profits that are necessary, we will leave them alone," said Khanyilise Kweyama.


Hlaudi Motsoeneng fired
On Hlaudi Motsoeneng's firing, Khanyilise Kweyama said the SABC had charges him with misconduct and of breaking the rules of his employment contract.

"I will not go into the details for the notice period and all those as those are people's files that are specific."

The SABC is supplying MultiChoice with the SABC News (DStv 404) and SABC Encore (DStv 156) rerun library channels for the DStv satellite pay-TV platform.

"We are in conversations with MultiChoice on that contract. That contract starts being renegotiated 18 months ahead of its expiry period which is around now."

"At this stage I cannot comment on whether we will renew, review, adjust, but we have started the negotiations.

"If there are any grey areas, as an interim SABC board, as we enter into this negotiating phase, we will pick those out, and that will also be a determining factor as to whether we continue with that contract, or adjust, review, or start from scratch."

"The latest is that we are at a stage where the two ministers - minister of communications and minister of finance - are discussing the bailout".


SABC not paying producers but able to pay staff
"We have publicly said that the financial situation of the SABC is in a bad state," said Khanyilise Kweyama, who said SABC staffers are being paid.

She however said nothing about producers supplying content to the SABC who are not being paid for months now.

"The fact that we are applying for a bailout says that the situation is dire."

"But at no stage in the past 3 months have salaries of staff been in jeopardy," said Khanyilise Kweyama.

"The only people who haven't been paid are the board."

"We are in the red but we don manage by ensuring the board is always on top of everything."