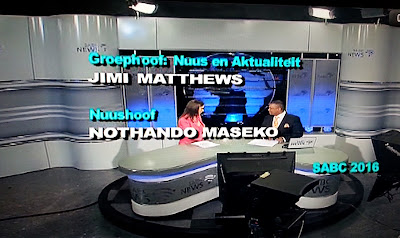 It's utter laziness or incompetence or both - coupled with an attitude of nobody who apparently really cares or takes any responsibility - as the beleaguered SABC's shoddy SABC TV news still runs, shows and includes Jimi Matthews name hilariously - horribly - two weeks after he immediately quit and left the public broadcaster.

Literally nobody at the SABC, not even Hlaudi Motsoeneng or James Aguma, either watches its own SABC TV news product output, or cares - or is apparently in any position to do anything about, or bothers to take any responsibility for it.

If anyone did - believe me - the name of Jimi Matthews would have disappeared and have been replaced not days, but weeks, ago.

On Friday evening, at the end of the second work week after Jimi Matthews left the SABC, the we-don't-seem-to-care public broadcaster still heartily ran Jimi Matthews' name at the end in credit rolls.

Mind-boggling but no longer really a surprise when it comes to the SABC and SABC News.

While the SABC, horrifyingly incompetent, keeps running the name of Jimi Matthews as its "group head of news and actuality" every single night in the credit roll of its TV news bulletins, a full two weeks after he resigned last Monday, keep in mind also that he left the SABC immediately and in a bad way where he was the acting CEO.

Jimi Matthews left without any notice period, or payout negotiations or severance package talks. It's not like the SABC has to keep his name in anything like its daily TV news bulletins because he's still supposed to work until the end of a month. He is gone. Immediately and permanently.

How little the SABC staff that's left at the crisis-riddled public broadcaster, either care or has in competence to ensure that basic things that is broadcast is actually correct, is blatantly evident in eye-rolling lapses things like this.

It's also not just Jimi Matthews.

Let's take just another example - although I see many. 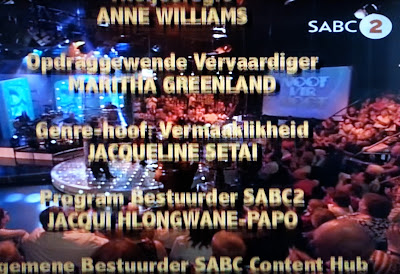 The high-ranking TV executive Jacqueline Setai has dumped and left the SABC months ago and is now a commissioning editor at Media24 for the VIA (DStv 147) female entertainment TV on MultiChoice's DStv satellite pay-TV platform.

It's excruciatingly embarrassing (but of course not to the SABC where nobody appears to care at all) to see Jacqueline Setai's name run (the last time viewers would have seen it was also on Friday night) at the end of Noot vir Noot on SABC2.

To add to the embarrassment, Jacqueline Setai's name was shown on the SABC and SABC2's Noot vir Noot at the same time as her name flashed on VIA on Friday night as a commissioning editor for that channel.

It's incomprehensible that the SABC doesn't take more care with its on-air visuals and TV-trash like this makes the public broadcaster read like the hilariously wrong, badly translated "instructions" leaflets you get from cheap and badly made Chinese imported products.

Whose responsibility is it at the SABC to check the very basic accuracy of actually video content (that includes things like credit rolls)? And why are these people not doing their jobs?

And why are the people above them who has overall responsibility apparently as slack in monitoring and caring as well?

Where are the marketing people, gaggle of supposed publicists for shows, channels and departments, and the actual TV executives who are supposed to watch their own shows and its playout to monitor and to ensure your actual service and shows are adjusted and conform to the highest possible standards and accuracy?

How are people supposed to trust SABC TV news if weeks after Jimi Matthews left your employ in disgust, you still happily roll him name as being part of your news division and news broadcast?

If you don't even watch your own news for accuracy in terms of what you display, how does it affect what's left of your credibility?

And what are you indirectly, directly telling your viewers in terms of how much (or actually how little) you value the integrity, correctness and quality of your content?

TV is a visual medium. If you don't understand why - when something basic is wrong like showing names of people on your programmes who are working for you - is damaging to your brand, all you need to do is go on a basic TV production or marketing or on-air visual literacy course and the helpful, expert people will be able to tell you.

Why does it take a TV critic having to point out that, uhm, why does the SABC show Jimi Matthews' names every single night, multiple times, instead of the several internal supposed SABC staffers who actually gets paid to adapt and correct and change it?

Watching the SABC roll with fake names night after night after night in programme after programme would be hilarious funny, like watching a kindergarden end of year Christmas concert - the bungling, the ongoing mess yet amateur attempt at often earnest effort - if it wasn't just so really sad and depressing.

This is the public broadcaster - the SABC - something that's supposed to be correct, precise, accurate, honest and a true and great reflection of public broadcasting values.

With Jimi Matthews and Jacqueline Setai gone (and these are just two easily spotted examples of erroneously, shoddily included names who according to the SABC are still there) the SABC shows how a lot of its TV content are none of these things.
on 2:57:00 PM