BREAKING. Viacom Africa says it will censor gay dads from Nickelodeon in Africa; MultiChoice's DStv will not show The Loud House episode with animated gays. 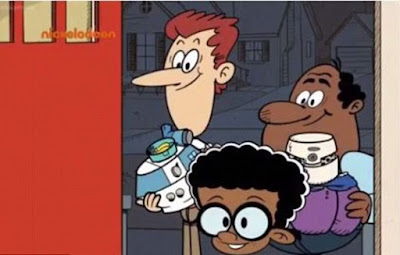 Viacom Africa is "reassuring" DStv subscribers in South Africa and the rest of Africa that it will be censoring the gay parents out of its animated Nickelodeon series, The Loud House, on its DStv channel.

According to Viacom, showing gay people on Nickelodeon is not appropriate for its Africa audience.

Viacom's Nickelodeon censorship is the latest in a growing trend the past few months where various channels on MultiChoice's DStv satellite pay-TV platform is censoring and pulling content for DStv subscribers across Africa, that is deemed inappropriate for subscription television viewers to be exposed to.

In October 2015 Discovery Networks International that runs the TLC Entertainment channel on MultiChoice's DStv was forced to pull the innocuous new docu-drama, I Am Jazz, about a transgendered teen's struggle and life journey from the channel across the entire Africa just before it was to begin broadcast.

In May NBCUniversal International Networks was suddenly forced to pull the second season of I Am Cait, a reality show about the transgendered Caitlyn Jenner – formerly known as Bruce Jenner - from its E! Entertainment channel on MultiChoice's DStv making it unavailable for the entire Africa.

The increasing censorship of DStv content comes as South Africa's crisis-riddled public broadcaster, the SABC has been mired in a public battle over the decision of its foolhardy chief operating officer (COO) Hlaudi Motsoeneng, to censor SABC TV News visuals of public protests.

Now Viacom Africa is the latest content and channel provider to MultiChoice to censor what it makes for the rest of the world but that it deems is bad for Africa's DStv viewers - in this case the introduction of a bi-racial, married gay couple who show up in a short scene during which they're seen dropping off their son at a party.

Following a recent episode of Nickelodeon's (DStv 305) animation series The Loud House featuring two gay dads, Viacom International Media Networks Africa (VIMN Africa) says it wants to "reassure" its consumers that "the episode will not air on the channel".

"Nickelodeon has confirmed that an episode of The Loud House featuring two gay dads will not air on its channel in sub-Saharan Africa," says VIMN Africa.

For VIMN Africa, showing married gay parents on TV in Africa is inappropriate. Viacom says "on-air content can differ from market to market".

Ironically Viacom Africa says "The Loud House is an animated series about the comedy and chaos of family life in all its forms".

For Africa's DStv subscribers it will however not include or show the animated gay dads, since "Nickelodeon strives to ensure that content respects the varying traditions and family values in each country." For The Loud House episode in question that was recently shown overseas, Viacom is however not just censoring it for specific countries but for the entire Africa.

Viacom Africa says The Loud House is "rooted in the creative team's own experiences from childhood and their observations today as parents themselves.  Its stories and characters are all grounded in the realities of many modern families today, as seen from the perspective of the 11-year old main character."

Nickelodeon previously showed a drag queen character in its series Bubble Guppies and a same-sex kiss in The Legend of Korra.
on 12:13:00 PM