How e.tv's once lofty ideals to give South Africans TV news and an alternative, turned into an apparent exercise of hate and loathing. 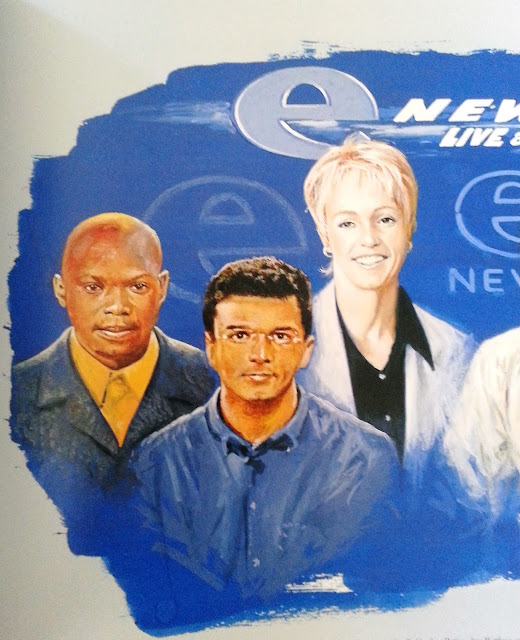 Image from the commemorative book, e: The First 10 Years

The steady and continued dismantling and downsizing at e.tv and eNCA (DStv 403) of its news ideals and news brand is shocking and should be a great concern for South African television viewers who should not only demand, but deserve better.

With Marcel Golding and Bronwyn Keene-Young gone in the bloody palace coup at e.tv, the most important two people who stood in the breach to protect, fight for, and champion eNews, eNCA and e.tv's news division are now standing on the outside, looking in, as they watch their once esteemed news child systematically being reduced and diluted since the end of 2014.

Sabido, eMedia Investments and e.tv executives are now very clearly signaling that what they don't care for anymore is news. What they do care for, is the bottom-line - especially since e.tv is millions of rands behind and below revenue projections.

The easy scapegoat is its news product.

With e.tv that wants to dump its news bulletin outside of prime time, e.tv executives can't be any clearer about the "value" - or lack of any - it places on producing and broadcasting news, ironically in an election year.

E.tv's apparent disdain with which it now views the "onerous" burden of having to give its viewers news instead of more EFC, Anaconda movie schlock fare and Fanny by Gaslight reruns is now in the open.

The gutted eNCA (DStv 403) where the bloodletting is continuing unabated has been a ghost of its former glory for over a year now and counting.

eNCA closed all its foreign news bureaus, its lofty UK broadcasting plan is in tatters, and there's the massive ongoing exodus of highly prized, excellent and experienced on-air talent who keep leaving - both forced out the door and fired, as well as people on-screen and behind the camera who've simply quit because they've had enough.

eNCA's Africa dreams got grounded and ebbed away when it dumped its entire African division.

eNCA canned its African bulletin and magazine shows, cancelled the majority of its once carefully build-up current affairs shows and dramatically enlarged the repeats on its "24-hour" schedule where a lot of hours that were previously "live" are now rebroadcasts.

eNews, e.tv's original TV news bulletin, Frankenstein-ed into its shocking latest trash television iteration called eNews Direct that has lost any semblance to its former pedigree, including anchors, news values and format, is likewise a visual fossil record of how a once respected and trusted brand is seemingly deliberately being snuffed off.

When eNews Live at 7 started on e.tv at 19:00 on 17 January 1999 it was a breath of fresh air. e.tv did the news from its Longkloof Studios in Cape Town. It said it wanted to be different; to give another perspective. (What happened to that ideal?)

San Reddy didn't wear a tie. He and Jane Dutton leaned on tables instead of sitting behind anchor desks. And within 18 months, eNews became the English language evening news bulletin of preference.

Now e.tv doesn't want to to do that anymore and doesn't feel it has a responsibility - as required by its broadcasting licence - to provide a half hour news bulletin nightly in prime time to South African viewers.

e.tv has tinkered and steadily broken its eNews bulletin by moving it around and away from 19:00 - and now complaining that viewers fled. It's like deliberately erecting a jumping castle in the rain and then saying you won't do it again for future birthday parties because the children are mysteriously absent.

Something that e.tv had built up as an upstart the hard way, over almost 2 decades through the very hard work of a dedicated team - it's eNews brand - the new men of the e.tv empire is willing to simply spin-off and cast aside, instead of working harder to fix what wasn't broken and to restore it to what it was and can still, and again, be.

It's easy to forget, or not to know, how drastically e.tv already destroyed the news offering it used to have.

The news was pushed from 19:00 where it did very well, and damaged and damaged some more, to get to the lobotomised hybrid-madness of the current eNews Direct.

With eNews - or more precisely "eNews Direct" shunted out of e.tv's prime time, it would literally mean that tens of millions of viewers will only have access once again to the SABC's SABC News broadcasts in prime time.

It would also signal that ordinary South Africans are not "allowed", "good enough" or "deserve" commercially produced free-to-air TV news.

It would mean that only South Africans who can pay for TV news other than the news from the public broadcaster, can get access to it through pay-TV like on MultiChoice's DStv satellite pay-TV platform.

That is very wrong - and an abhorrent signal to send, especially from a TV broadcaster who got its broadcasting licence in the first place by saying it will target and service the rising black middle class in South Africa.

One wonders what journalism's Prof. Anton Harber, now the editor-in-chief of eNCA, thinks of this.
UPDATE Thursday 14 April 2016 - I heard directly from Prof. Anton Harber who wrote to me, and asked that I please publish his letter. He says my suggestion that this is e.tv dumping its news, is misleading.
"News may shift around and change and we live in a world in which news consumption is changing radically but we are more committed than ever to ensure our news meets audience needs and is of the highest quality." Please read his entire letter here.

If e.tv gets to dump its main news bulletin from its prime time line-up, it would be a massive step for what it audience and what e.tv's audience deserves, for South Africa, and for the local news and TV news industry.

TV news in prime time means prominence. It means it matters. It's agenda setting. Besides just what it communicates, it also says to viewers that the news and it being there, matters to all of our daily lives as citizens in a democratic society.

Viewers can't just watch WWE wrestling and The Young and the Restless. Viewers also need to be informed.

e.tv is like an irresponsible parent whose kids already eat Happy Meals seven days a week, now saying: "It's okay, you don't need to eat the slice of apple. In fact, I will replace it daily with a box of Astro's although more unhealthy - because its less effort, easier and above all, so much cheaper".

e.tv surely knows that wanting to dump its news out of prime time is irresponsible and a "bad" thing for its image and for South Africa.

Yet, because on paper the numbers and savings, and the revenue it could potentially earn from more Gold Diggers instead of eNews Direct, makes "good" business, it's willing to sacrifice what it should be doing, for what it wants to be doing for the sake of more money.

Even more Astro's to replace the already small slice of apple on its prime time plate, is definitely not the diet change that e.tv, nor South Africa, needs.
on 10:33:00 AM