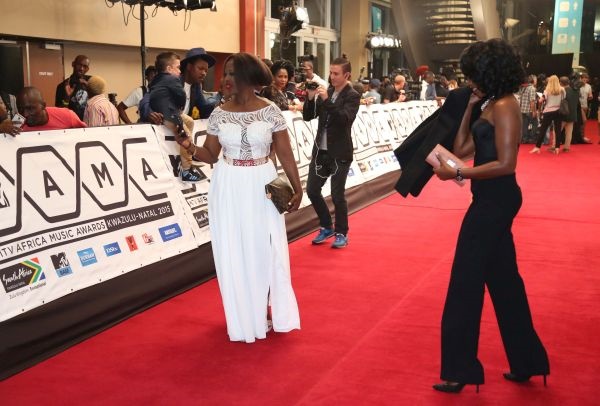 PR organisers of the 2015 MTV Africa Music Awards on MTV Base (DStv 322) which took place on Saturday evening showed little love to the media, literally banishing them from the red carpet and bizarrely putting them in a waist-high steel pen alongside the carpet like animals.

The fenced-off red carpet at Durban's International Convention Centre not only dramatically curtailed the way TV, print and online media platforms interviewed and photographed the stars who had arrived from across Africa, but also limited the access the media traditionally get for snap interviews and quick pics of celebrities and TV executives.

It's not clear why Viacom International Media Networks Africa (VIMN Africa), which runs MTV Base and the MAMAs, made the drastic break with last year's traditional red rope to separate the strolling celebrities and the press for a walled-off approach.

A black steel wall to push the press aside is never seen alongside American red carpet events or even hyper-security events like the Oscars, Grammys and Golden Globes as it wouldn't be tolerated by reporters in America.


'Please come to the fence'
Several shorter female reporters struggled for whom the steel fence was basically almost shoulder-length high, and who could only lean over with an arm and outstretched microphone.

Stars who walk the red carpet because they and their publicist want the exposure, are usually gently grabbed and steered or softly "hand-guided" over for a quick question or five seconds to smile for camera flashes before moving on a metre to the next media outlet against the sponsors’' backdrop – the wall-length banner and the process both known in the trade as a Step and Repeat.

This year it was harder for all media who had to call celebrities to "please come to the fence" with several stars who simply walked on by.

While electronic media create the illusion that the interviewer is also on the red carpet although they're actually standing on the very edge, VIMN Africa made that impossible this year.

Reporters had to stretch microphones, dictaphones and smartphones over the fence, hoping to catch some celebrity lightning in a bottle.

The units used to separate the press were more solid and heavier than even the customary crowd control barriers, wrapped with black fabric, which were used inside the auditorium this year to separate the standing crowd from the actual stage and walkways to prevent them from touching it and the on-stage talent.

Comedian and actor Trevor Gumbi, who represented MultiChoice and was DStv's reporter alongside the red carpet, was one of a few reporters who initially dared to step onto the side of the red carpet to conduct on-camera interviews.

TV with Thinus observed how VIMN publicists banished Trevor Gumbi from the red carpet – twice – saying reporters must stay behind the steel barrier.


'Too difficult'
"What next year? Floor to ceiling transparent plastic with a little hole like at the bank to shout through so the famous don’t have to breathe the same air as us?" remarked one journalist on Saturday evening.

"This is too difficult. They don't see and can't hear us," said another journalist, as a female reporter from GoldMyneTV in Nigeria valiantly battled for whatever celebrities were willing to give soundbytes.

At the end, while stars like Basetsana Kumalo were still walking the red carpet and doing interviews, VIMN Africa suddenly announced the red carpet over and said "the press must now leave".

There were positive changes from last year however. The first was a reversal of the red carpet direction – with celebrities who started from a back entrance and elevator and walked towards the front of the Durban ICC. Also better and more audible were the announcements of who was entering the red carpet.


Bewildered
Several African artists and celebrities at the 2015 MAMAs appeared clueless about the inner workings of the red carpet walk, appearing without their publicist, several failing to stop once as journalists dropped expletives off the side about why the stars are bothering if they’re just going to walk by without doing interviews or stopping for photos.

The dismissive Anthony Anderson who was the host this year, only did interviews at the top of the press run where media like CNN, AFP and CNBC Africa were allocated their A4 paper spots after which he walked the whole length of the red carpet without stopping once for photos or interviews until the very end for another short media engagement.

Without wasting time, local celebrities like Boity Thulo, Bonang Matheba and Bucie proved red carpet pro's as usual, making time for any media which called, yet moving along at a steady pace.

Stars like Pearl Thusi remembered the golden rule as she twirled in her ice blue dress – giving individual media outlets covering the red carpet all something worthwhile which took brief seconds each time, instead of sprinting for the end.

The majority of stars appeared unbriefed about keeping to the imaginary straight line down the middle to ensure the best exposure to the Step and Repeat whilst remaining accessible to the media, opting instead to scuttle down the carpet the furthest away from the press against the back wall.
on 3:17:00 PM