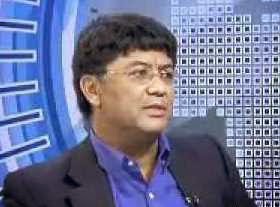 The suspended e.tv boss Marcel Golding says his suspension is the result of government political interference in news coverage on e.tv's eNews and eNCA (DStv 403).

Marcel Golding alleges in filed court papers to block his shocking suspension which took place this week, that his suspension is partially the result of behind-the-scenes corporate and political infighting in which Hosken Consolidated Investment's TV channel e.tv and its news division eNews and 24-TV news channel eNCA were pressured to cover positive ANC news.

The political pressure for certain news coverage allegedly followed after e.tv's lobbying process of the government to take e.tv's side of the ongoing, and unresolved, battle over set-top box (STB) control for decoders when South Africa eventually switches from analogue to digital terrestrial broadcasting (DTT).

In an affidavit lodged with the Cape Town Labourt Court, Marcel Golding details how he was "forced out" due to the trade union SACTWU who first sidelined his wife, Bronwyn-Keene-Young who is e.tv's chief  operating officer (COO), when she allegedly resisted and rebuked a direct instruction to do political news coverage from an ANC minister.

Marcel Golding alleges that a technical transaction with Ellies is now being used to try and force him out. He says the disciplinary hearing "has been launched after months of attempts to get me to relinquish the chair of the board of HCI and resign as CEO of e.tv and Sabido as a result of my refusal to permit e.tv to be used for political purposes by a trade union that is invested in the group".

In his affidavit Marcel Golding alleges that "SACTWU has persistently attempted to influence the editorial direction of eNews in order to further its agenda".

"On 24 March 2014 Yunis Shaik addressed an email to Bronwyn Keene-Young stating that the minister of economic development Ebrahim Patel had called him and asked that a supplied news feed of president Jacob Zuma opening a dam be aired on the e.tv evening news. It should be noted that this request was made four days after the Public Protector's report into Nkandla was made public."

"Bronwyn Keene-Young and I were at a conference and unavailable to respond. Shaik therefore, after receiving another call from minister Patel assumed the responsibility to liaise with Patrick Conroy, the managing director of eNCA."

"On 24 March Bronwyn Keene-Young replied to Shaik's email and explained the inappropriateness of Shaik's conduct to him in the context of news integrity and appealed to him to never make this kind of request directly to our managers," says Marcel Golding.

On 29 April 2014 Marcel Golding says in his affidavit that Shaik contacted Bronwyn Keene-Young again, again over a debate due to be held between Ebrahim Patel and the opposition party at the University of the Witwatersrand.

"Patel asked that a clip of an earlier Reserve Bank meeting be aired during the debate. The clip would be supplied and Patel evidently believed it showed the opposition party was incorrect in certain statements it had made regarding the Reserve Bank."

"On 19 May 2014 I received another text message from Shaik. This time it was about the possible mention of another HCI affiliate, Tsogo Sun: 'Maggs on Media. He will feature a story on gabmling addiction. See the story before he airs it. Watch the visuals. It would be terrible if he features Tsogo. Check to see if it is balanced and includes activities we take for responsible gambling."

Marcel Golding states in his affidavit that on 14 August 2014 he was sent the following SMS by Andre Kriel of SACTWU: "Will call you tomorrow. Violet Seboni Memorial lecture will be on 25 August in Johannesburg. Minister Patel will deliver the lecture. We require e.tv to cover it live. Please arrange."

"I was also threatened that should I not resign I would be suspended and disciplined on account of my purchase of Ellies shares - the subject matter of the impending disciplinary hearing."

"I believed Ellies was strategically sound to invest in. I saw such an investment as a strategic investment for one of our key Sabido subsidiaries which is struggling to meet its targets [Platco Digital's OpenView HD]."

"The subsidiary is a free-to-air satellite platform which is dependent on the distribution - by Ellies - of set-top boxes [STBs]."

"In opposing the attempts to manipulate news content I have been acting to protect the rights of editorial staff to run an independent news service," says Marcel Golding's affidavit.
on 9:56:00 AM