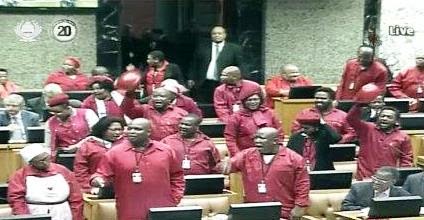 MultiChoice's Parliamentary TV channel (DStv 408) on DStv first cut the audio to silence the channel and then cut the camera and visuals to prevent DStv subscribers from seeing what is happening inside South Africa's democratic parliament, while reporters were forcibly removed.

It's not clear whether MultiChoice cut the sound and visuals or why the Parliamentary TV channel suddenly stopped showing what's happening inside parliament.

Chaos erupted when EFF political party members started shouting "Pay back the money!" when president Jacob Zuma refused to answer a question from EFF party leader Julius Malema on when he will be paying back the money spent on the highly controversial Nkandla upgrades.

First audio and then visuals on the Parliamentary service to South Africa's National Assembly then got cut.

MultiChoice on Thursday didn't respond to media enquiries as to why DStv's Parliamentary TV went off the air.

Journalists started reporting that the press were being forcibly removed from parliament and evicted from the media gallery against their wishes.

Several press members were adamant that they will not be leaving parliament and refused to leave the press gallery to bear witness to the events and the stand-off between the EFF and police members inside the National Assembly.

At 16:00 the media and press were told they can now stay. eNCA's Paula Chowles and Lester Kiewit  are still inside parliament.

At 16:11 the Parliamentary TV channel on DStv went live again. Still no explanation as to why the feed to DStv subscribers were unilaterally cut.
on 4:02:00 PM