TOLDJA! How the SABC lied - and keeps lying - about moving the Afrikaans TV news away from millions of viewers by shunting it to SABC3. 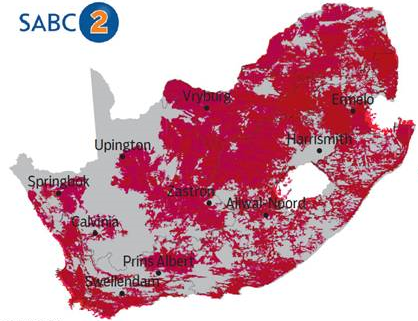 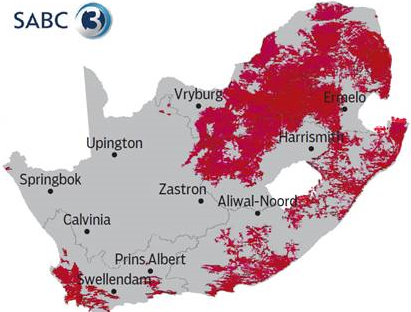 Graphics - as published Monday in Beeld, Volksblad and Die Burger - showing the vast differenc in the reception area of SABC2 and the much smaller reach and footprint of SABC3


Exactly as TV with Thinus broke the news last month the SABC has permanently moved the public broadcaster's only Afrikaans TV news bulletin permanently from SABC2 to the much smaller SABC3 together with the bulk of Afrikaans language programming - like drama - permanently.

The South African public broadcaster blatantly lied when it said the move of the Afrikaans TV news bulletin from SABC2 to SABC3 is "only temporary" and already knew it wasn't the case.

The SABC, both in press statements as well as in on-air promos lied and told viewers that the move is temporary and that the Afrikaans news would return on 14 July after the end of the 2014 FIFA World Cup.

SABC3 has the smallest footprint of the SABC's three terrestrial TV channels, with literally millions of South African TV households who are unable to receive this TV channel.

The result is that millions of South African TV households are no longer able to see any Afrikaans TV news on the SABC at all, and are unable to see any of the programming - ranging from any dramas, to programming like Pasella, Fokus, 50/50 - that they have always had access to.

This marginalises millions of SABC TV licence paying households who no longer are getting access to Afrikaans TV news in their language, or other programming.

The SABC knew with making this move, that SABC3 has a smaller footprint than SABC2 but said it is going ahead with the schedule changes anyway, as is evident from an internal memorandum with market research compiled by the SABC and issued by high ranking SABC TV executives.

In the internal memorandum issued in June to other SABC executives, SABC executives call SABC2 a "schizophrenic TV channel", and that the move will go ahead although there isn't equal access to all the SABC's TV channelsm which will only happen once digital terrestrial television (DTT) starts in South Africa.

Instead of being honest, the SABC chose to try and vilify and discredit me as a messenger and a journalist, calling me a "self proclaimed Cape Town based TV critic" doing "malicious" reporting, although I've been a TV critic writing nationally for over 14 years.

I kept reporting in June on how the SABC will dump several Afrikaans language shows from SABC2 and move it to SABC3, including the drama slot.

I kept reporting, importantly, on how Afrikaans TV news on the SABC as well as other programming are set to disappear permanently from the TV screens of millions of South African TV viewers.

Here is one of the on-air promos the SABC kept broadcasting during the 2014 FIFA World Cup - this one for instance on 28 June (long after the SABC knew that the move would be permanent) telling viewers the Afrikaans news would "return to SABC2 on 14 July:

Here is the SABC's Afrikaans TV news bulletin from Monday night, 14 July - suddenly still on SABC3 - and announcing in the evening, with no warning to viewers, that the bulletin is permanently staying on SABC3:

Meanwhile SABC2 started running an on-air scroll on Monday evening and Tuesday evening telling viewers to look for the Afrikaans news on SABC3.

The SABC keeps lying: The South African public broadcaster on Tuesday said the major schedule changes has nothing to do with language and the Afrikaans language.

TV with Thinus however has internal correspondence issued by high ranking SABC TV executives making it clear that the programming shift is taking place due to Afrikaans, and is motivated because of language and Afrikaans viewers and ratings of Afrikaans TV news and Afrikaans programmes and are centred around the performance of Afrikaans on SABC2 and the struggling ratings performance of SABC3.

TV with Thinus has made numerous media enquiries to the SABC regarding this issue, all questions of which the SABC has so far declined to answer.

TV with Thinus asked the SABC why the SABC said the Afrikaans TV news bulletin would be moving back after the end of the 2014 FIFA World Cup from SABC3 to SABC2 and that the move is temporary when it clearly wasn't?

Why did the SABC run on-air promos telling viewers that the Afrikaans news would be moving back to SABC2 on 14 July, when the SABC knew that this will not be the case?

Can the SABC say how many millions of TV households are affected by the permanent move?
on 12:49:00 PM