BREAKING. SABC blasts Mail & Guardian article 'Hlaudi is here to stay'; says Thursday's statement is the only official comment from the SABC. 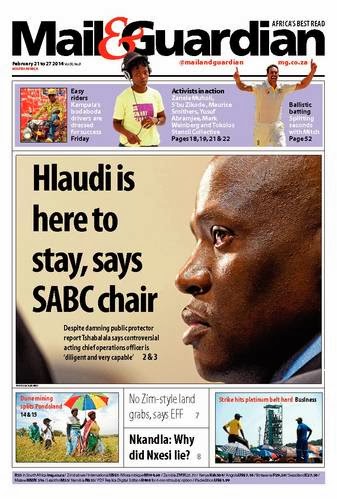 The SABC just put out a statement at 17:18 saying that a Mail & Guardian story out today by journalist Glynnis Underhill headlined "Hlaudi is here to stay" is not true and that the SABC's only official response on the matter regarding its matricless acting chief operating officer (COO) Hlaudi Motsoeneng is the statement the SABC released yesterday.

The SABC says Thursday's statement is "the only official comment from the SABC board until further communique".

In the statement the SABC issued on Thursday, the public broadcaster said that the SABC board met on Wednesday to discuss the issue of the Public Protector's final report (released on Monday) about the SABC and the matricless Hlaudi Motsoeneng.

The SABC said in Thursday's statement that the SABC board has "committed to review it further, seek legal advice and also consult all relevant parties before taking any action in this regard. It must be noted that the current SABC board is new and needs to acquaint itself with all the facts in order to allow itself to apply its mind accordingly".

The SABC chairperson Zandile Tshabalala said in that statement that "the SABC board would like to ask the public to allow them space to go through the review processes as speedily as possible".
on 5:27:00 PM