The Big Debate's Siki Mgabadeli: 'I was extremely disappointed and frustrated with the SABC. Thanks to eNCA ordinary voices will be heard.' 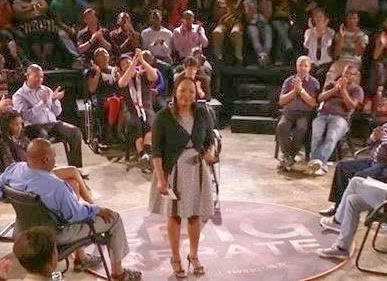 e.tv and the eNCA's publicity department is unable to answer a specific media enquiry first which TV with Thinus made yesterday regarding The Big Debate dumped by the SABC and now moving to eNCA (DStv 403), but has now send out a general statement to all press, with more information.

"When the show was pulled off air at the last minute, I was extremely disappointed and frustrated with the SABC," says Siki Mgabadeli. "It seemed that the voices of ordinary people across the country would not be heard. Thanks to eNCA and e.tv, those voices will now be part of the national debate," she says.

The Big Debate executive producer Ben Cashdan says "nothing is off limits" and that "right now South Africa needs more than ever a space in which marginalised voices can be heard."

"As we head into 20 years of democracy, we feel it is critical to debate the issues facing our country," says Patrick Conroy, the group head of news. "How can that be a bad thing? It is just a contestation of ideas - that's what freedom is all about."

"We agreed to broadcast the show becase we feel it is in the public interest to do so," says Monde Twala, e.tv's group head of channels. "The channel is committed to ensure that debate-driven content is widely accessible to the majority of South Africans."