BREAKING. Maria Bartiromo leaving CNBC, will disappear from the end of the week from CNBC Africa on DStv. 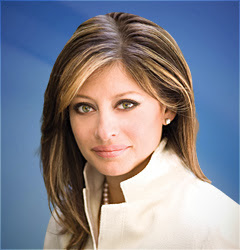 Maria Bartiromo is leaving CNBC and will soon no longer be seen on CNBC Africa (DStv 410) on MultiChoice's DStv on the business news channel which simulcast CNBC.

CNBC's star anchor is leaving CNBC in the United States after 20 years. She is expected to move to the little watched competitor Fox Business News (FBN) for a new daily markets related programme. FBN is not carried by a South African pay-TV operator.

Maria Bartiromo is however also expected to make appearances on Fox News Channel (TopTV 405) which is carried by On Digital Media's (ODM) TopTV, soon to be called StarSat.

Maria Bartiromo just celebrated her 20th year with CNBC last month which she joined in 1993 and where she has been the anchor of Closing Bell. Her loss comes as a huge blow to CNBC as well as CNBC Africa where she has been a very familiar face.

Maria Bartiromo became the first TV reporter in television history to broadcast daily from the floor of the New York Stock Exchange where she got the nickname "Money Honey".

"After 20 years of groundbreaking work at CNBC, Maria Bartiromo will be leaving the company as her contract expires on 24 November 24," says CNBC in a statement. "Her contributions to CNBC are too numerous to list but we thank her for all of her hard work over the years and wish her the best."

In a statement Maria Bartiromo says "After twenty great years of having a front row seat to some of the most important economic stories in the world, it's hard to sum up the gratitude and appreciation I have for the team that helped make it happen."

"I am incredibly proud of what we have been able to accomplish. I want to thank all the people at CNBC who have been with me on this journey, and of course the viewers and investors everywhere for making me love every minute of it."
on 8:16:00 AM