More blatant SABC News censorship as the public broadcaster now shockingly blurs out other news organisation logos from its footage. 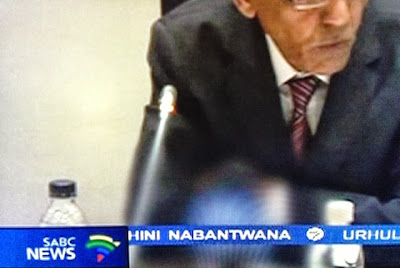 Look closely and you'll see it - on closer inspection it's plain to see that the SABC and SABC News is now distorting news footage broadcast on-air to blur out on its airwaves what it can't control and doesn't want viewers to see - such as mic flags from e.tv's eNews and the eNCA (DStv 403) microphones.

This is done to footage publicly filmed, in a public arena where mics are placed in front of people at public news conferences. No blurring or deliberate alteration to give the viewer less information or a censored version should ever be done.

The SABC and SABC News's shockingly amateur, petty and unprofessional news broadcasting behaviour is repulsive and completely out of line with international TV news values and practice.

While ordinary TV and news viewers might not care, in fact even hardly notice, something like this should send shockwaves through a TV and news industry.

The SABC isn't saying why it is blurring news footage and blurring out other news organisation's logos, or if this is now new Auckland Park policy for SABC News.

The SABC and its news division is altering captured news and distorting original news footage through deliberate blurring which falls in neither the offensive category, nor has to do with keeping the identity of a person or place secret for legal or personal protection reasons - the only times when a TV news outlet or current affairs programme would or could alter news footage in post editing.
on 10:38:00 PM