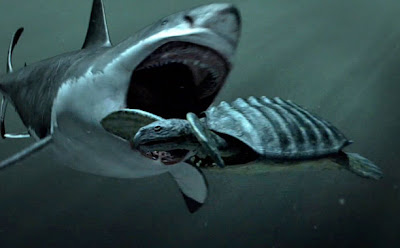 The Discovery Channel is being heavily criticised by viewers after the broadcast of a fake documentary, Megalodon: The Monster Shark Lives on the factual entertainment TV channel.

Viewers said the megalodon TV special is damaging Discovery's reputation after it showed the programme on the channel in the United States as part of Shark Week about a creature of which it's current existence is unproven.

In a statement Discovery's Shark Week executive producer in the United States says "we wanted to explore the possibilities of Magalodon. The stories have been out there for years and with 95 percent of the ocean unexplored, who really knows?"

Discovery previously broadcast similar fake documentaries such as Mermaids: The Body Found and a follow-up, Mermaids: The New Evidence.

Chiming in with viewers' criticism was actor Wil Weaton of Star Trek The Next Generation fame who wrote "Discovery Channel started Shark Week with a completely fake, completely made-up, completely bulls-it 'documentary' and they lied to their audience about it. They presented it as real."

"Discovery had a chance to get its audience thinking about what the oceans were like when megalodon roamed and hunted in them," wrote Wil Weaton.

"It had a chance to even show what could possibly happen if there were something that large and predatory in the ocean today … but Discovery Channel did not do that. In a cynical ploy for ratings, the network deliberately lied to its audience and presented fiction as fact. Discovery Channel betrayed its audience," wrote Wil Weaton.

" Discovery Channel isn't run by stupid people, and this was not some kind of mistake. Someone made a deliberate choice to present a work of fiction that is more suited for the SyFy channel as a truthful and factual documentary. That is disgusting, and whoever made that decision should be ashamed."
on 9:25:00 AM