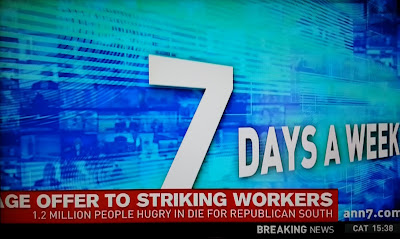 Even ANN7's on-screen lower-third bumpers are riddled with not just spelling mistakes, but non-sensical sentences, such as this one ANN7 had on Saturday: "AGE OFFER TO STRIKING WORKERS - 1.2 MILLION PEOPLE HUGRY IN DIE FOR REPUBLICAN SOUTH."

In addition when this bumper flashed on screen as "Breaking News", it was even cut off on the left hand side of the screen, and is supposed to read "WAGE".

There's even a spelling mistake with "HUGRY" in the sentence (which makes no sense anyway) and which was probably supposed to be HUNGRY.

ANN7's lower-third bumpers also often drives into the ann7.com image on the right hand side of the screen, where text then clash and overlaps on each other, making it illegible anyway.

And the ANN7 white on black news crawl at the bottom ... well, it crawls with constant and ongoing embarrassing spelling mistakes since MultiChoice launched ANN7 on DStv on Wednesday.
on 4:55:00 PM