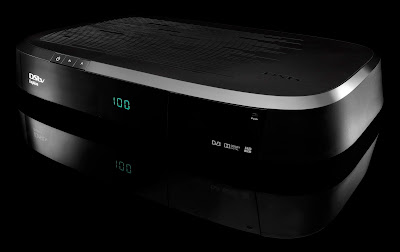 MultiChoice just unveiled its brand-new next generation DStv Explora decoder which will become available from 15 August at a retail price of R2499 and which is loaded with terabytes more recording space, enhanced functionality and an improved interface and which will in time also include broadband internet connectivity.

Nicknamed by MultiChoice insiders as "the pebble" due to its shapely curved design, the new DStv Explora in a black casing is the first DStv decoder model to now come branded with a specific brandname - one which will be carried forward for this PVR decoder line.

The DStv Explora with a massive 2TB hard drive allows room for the recording of 220 hours of TV content will mimic the broad video-on-demand (VOD) services which pay-TV viewers are increasingly gravitating towards.

The DStv Explora comes with a major expansion in the amount of content MultiChoice will be able to make available to push to subscribers on the DStv Explora thanks to the increased capacity, with a dramatic increase in the DStv Catch Up and DStv BoxOffice services and catalogue of titles offered on the new PVR.

Pace's relationship with MultiChoice dates back to the development of DStv's very first personal video recorder (PVR) in 1995.

The new DStv Explora comes complete with a redesigned DStv remote including hotlink buttons and a much more visual, streamlined, image rich interface as well as improved all-round functionality and better search options.

The DStv Explora represents MultiChoice's new next generation premium entertainment console to anchor subscribers' home viewing as more content than ever before gets funneled by satellite direct to homes.

MultiChoice will not be launching the DStv Explora with broadband connectivity, although the HD PVR which is making use of a new Linux with Java operating system has originally been conceived to be an internet connected device.

South Africa's terrible broadband prevalence - both in penetration levels and speed - has hampered plans for devices such as the DStv Explora to be seemlessly internet connected.

South Africa is the African continent's most advanced pay-TV market, yet high broadband penetration is still lacking and only 1,7 people per 100 inhabitants have access to a fixed line broadband connection.

MultiChoice will enable internet connectivity later for the new DStv decoder as broadband penetration grows and as DStv subscribers continue to adapt to the evolving VOD service.

For now the DStv Explora is the way in which MultiChoice will pump content 24/7 to a bigger set-top box and making a much larger catalogue of on demand content available to DStv subscribers.

The need for a new decoder is necessitated by the number of high definition (HD) channels which keeps growing and which require more recording space for user recorded programming, as well as the lifestyle changes where subscribers demand the instant viewing of content.

The DStv Explora saves two hours of television in the buffer of the live TV channel the decoder is tuned to, but now "remembers" and retains it for that same period even if a DStv subscriber switches channels.

Other much improved functionality with the DStx Explora includes the HD on-screen display. It's highly visual and mimicks Netflix and Hulu and other on-demand content operators in the United States with a representation of a "shelf grid" display populated by constantly updated content.

The DStv Explora is ExtraView capable and has a new blue "DStv" blue hotlink button on the remote control which takes the user straight to "DStv Central" from where the subscriber can navigate and scroll through sections and options.
on 7:23:00 PM