BREAKING. SABC1 refuses to pull Tropika Island of Treasure 5 from the schedule following the violent death of contestant Reeva Steenkamp.

SABC1 refuses to pull the reality show Tropika Island of Treasure 5 from it schedule which is set to start on Saturday 16 February just two days after the violent death this morning of the model and reality contestant Reeva Steenkamp.

The SABC says the first episode of Tropika Island of Treasure 5 set in Jamaica will go ahead on Saturday as scheduled.

Reeva Steen-kamp was Oscar Pistorius' girlfriend and she was allegedly shot by him in the head at his home in Silwer Woods Estate during the early hours of this morning.

The police is investigating a case of murder and is also opposing the bail application of the Olympic and paralympic athlete.

Kaizer Kganyago, the SABC's corporate spokesperson tells me that Tropika Island of Treasure 5 produced by Stimulii as an advertiser-funded production for the channel will proceed and that the first episode will be shown on Saturday on SABC1.

That comes as M-Net and DStv has immediately pulled all  Oscar Pistorius TV ads and promos and will remove all billboards as soon as possible. 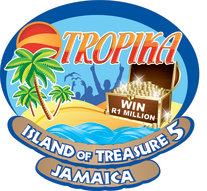 "As SABC1 we are deeply saddened by the tragic turn of events involving one of the players on our show, Tropika Island of Treasure 5," says Vukile Madlala, SABC1 publicity manager.

"Our thoughts and prayers during these trying times are with the family and friends of the dearly departed Reeva Steenkamp."

Broadcasters, advertisers and companies usually pull shows and adverts in the wake of real-life deaths of actors or people in productions out of sensitivity for the people involved, as well as viewers who might react negatively.

News channels worldwide including the eNCA in South Africa went into overdrive this morning reporting the news.
on 2:23:00 PM