BREAKING. Sanctuary drops Agam Dharsi as a regular cast member in the 4th season, as the character of Kate Freelander is written out for now. 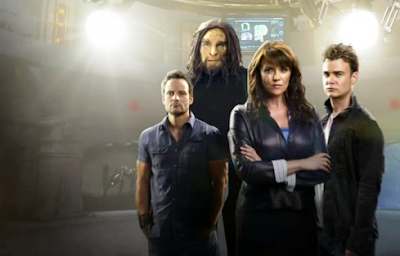 Mmm. Who's talked about this yet? No-one. Not here or Middle Earth.

Sanctuary has quietly dropped another main cast member. The 4th season of Sanctuary just started in America, and gone and seemingly written out is Agam Dharsi, who played Kate Freelander the past two seasons. She might be back. Who knows.

Agam Dharsi immediately disappeared from the opening title sequence, no longer standing with the other main characters. Her name also no longer features. She appeared in the first two episodes and has a few lines at the end of the second episode of the 4th season telling Magnus she's leaving to help with the resettlement of the destroyed Praxis (no, not the Klingon moon - Middle Earth).