BREAKING. How Class Act creator Donovan Marsh clearly stepped in to save the first episode of the second season of the SABC1 reality show. 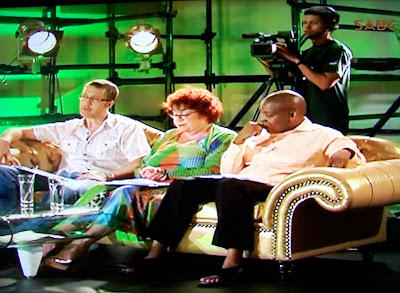 It's now become blatantly and abundantly clear in what a flat spin the Class Act production must have been behind the scenes of the reality show during the filming of the first episode for the second season that started tonight on SABC1.

The announced and awaited, yet no-show judge Mfundi Vundla, simply didn't show up - while the whole production was stalling and waiting for him to arrive on the Saturday morning. The production crew of Curious Pictures - while filming started and contestants stodd in line - wasn't even by this late stage aware that Mfundi Vundla was not going to be there. Class Act creator Donovan Marsh eventually stepped in to become the third judge to replace the no-show Mfundi Vundla by the Saturday afternoon when it became clear that the Generations producer simply wasn't going to be in Cape Town, and didn't even get on the plane to fly to the Mother City in the first place.

Donovan Marsh however - joining the Class Act judges Moonyeenn Lee and Rapulana Seiphemo on the golden couch for the Cape Town auditions in the first episode of Class Act - did wonderfully however. The production would be well served by keeping the affable, intelligent, well-spoken and sensical Donovan Marsh on-screen. Besides creating the show he acquited himself extremely well as a Class Act judge - and given the sudden tumultuous circumstances of being thrown in at the deep end in front of the cameras on super short notice to solve an emergency production crisis.

It's very clear now that Donovan Marsh is the one who basically stepped in and saved the show - preventing the first episode of the second season of Class Act from being an on-screen disaster.

ALSO READ: A Class Act - Why Class Act creator Donovan Marsh needs to be made the 3rd permanent new Class Act judge by the producers immediately.
ALSO READ: Super-agent Moonyeenn Lee is utterly brilliant as the biggest bitch on South African television in the second season of Class Act.
on 8:42:00 PM