TRON-TERRIFIC: Tron Legacy is a dazzling, digital delight in 3D, coming to South Africa on 31 December.

My forte is television, although I love movies too (I just don't have time to cover it as intensely as I do TV). When great ones come along, like Avatar at the end of last year, I do make sure to go and see them, and earlier tonight I was granted a special 20 minute exclusive sneak-peek at Tron Legacy that opens in South Africa on Friday, December 31. Great movie!

Tron Legacy is a sequel to Tron of 1982. If you haven't seen it, don't worry. If you have, there's an added layer of pleasure with several actors in the returning cast and a perfectly developed sequelized narrative.

The 20 minutes of Tron Legacy that was shown to selected critics across the world today, started with a special personal introduction by the actors Jeff Bridges, Garrett Hedlund (start remembering this name) and the utterly-beautiful Olivia Wilde exactly in the same way Avatar has done last year. Then there's a brilliant Tron-themed computerized message in keeping with the computer world mythos of the movie (>Attention Programs.) (People are ''programs'' in this arresting Matrix-like/iPod/infused post apocalyptic world.) After that 20 minutes of selected scenes from this Disney production that completely dazzled.

For more on the sheer terrificness of Tron Legacy, click on READ MORE below. 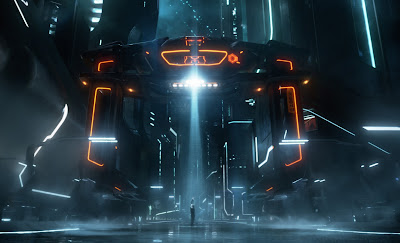 How brilliant and captivating is Tron Legacy? Well, the whole movie isn't 3D . . . And that's wonderfully clever! In the worldwide ''Tron Night'' showing 20 minutes of footage in 48 countries, Tron Legacy starts off normal with Sam (Garrett Hedlund) who (I won't spoil it) renews the search for his father Kevin Flynn, once the foremost video game developer in the world who disappeared 29 years ago. Sam's man pad is BRILLIANT and beautiful by the way - a large cargo container on a harbour's edge, looking all Men's Health/GQ styled on the inside with a magnificent urban chic view.

Then when Sam enters the geometric computer generated world, Tron Legacy turns 3D in an awesome and most incredible way - the 3D effect actually becoming its own, truly functional, intangible motif aiding the on-screen narrative of the film. The sheer artistic creative genius, and finely detailed conceptualized rendering of objects and the sheer inventive look of the retro-futuristic world of Tron Legacy is visually compelling, fantastical yet real, and really mesmerizing. You have to see it. 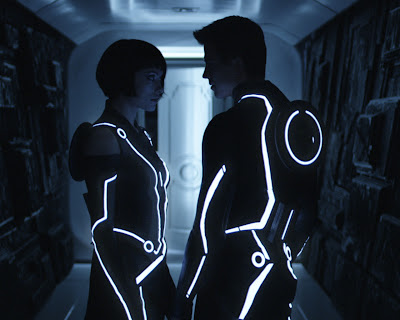 I won't spoil anything but obviously, just like his father so many years ago, Sam enters/gets trapped/becomes involved with/in the retro-cool arcade video computer game world his dad created all those many years ago. In just 20 minutes - and why Tron Legacy looks like it will be great, besides just the wonderful look of the film - is multiple deep themes and hidden symbolism underlying a dazzling digital array of action sequences. 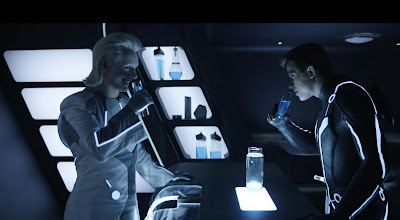 Tron Legacy touches on fathers and sons, escapism (sometimes its own prison) versus the pain of reality, time and eternity (and lost youth. . . regained!), choice and fate, and whether its form versus function, form for function, or function for form (all of them actually! Tron Legacy beautifully merges, then juxtaposes, then blends them in an awe-inspiring digital environment). Storywise there's romance, redemption, surprises, action and a stylistic retro-game coolness that's infused throughout the movie. When it comes to an end-of-the-year movie filled with a blue hue, Tron Legacy is absolutely this December's Avatar. You have to see it.
on 1:06:00 AM