EXIT INTERVIEW - Survivor SA Santa Carolina Sandi Schultz: ''I went and made friends. Maybe that was my downfall.'' 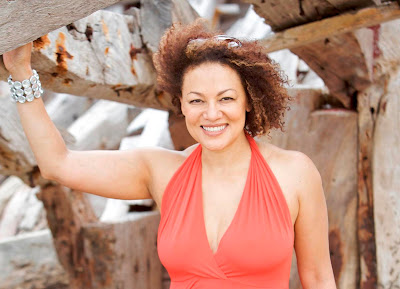 I can bring you the VERY FIRST independent exit interview with Survivor SA Santa Carolina celebitant Sandi Schultz who got totally blindsided in this evening's episode and got voted out in one hectic drama filled sixth episode.

I spoke with Sandi Schultz to ask her if she expected anything, how she felt in tribal council when her name started coming up and what she's learned about nature. She told me who she liked and who she didn't like so much, who she thinks is playing the game and will still go far, and has a surprising answer on what she'll want to say to whom at the live reunion show.

For my full interview with Sandi Schultz, click on READ MORE below! 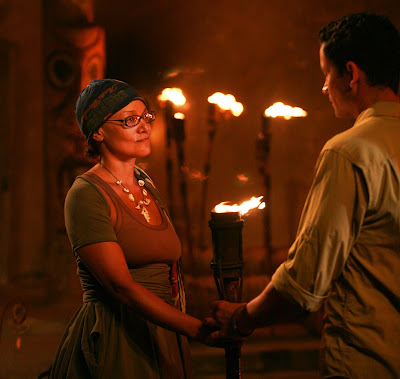 What did you make of your experience on the island?
Wow. Now that's an all-encompassing question. Ha ha.

And then people obviously just saw a very hectic episode – almost described in soap opera proportions – what did you make of the events and everything that transpired?
Look, what people see and interpret would obviously be different from how I would interpret it because I actually lived it. So for me, its interesting to see what happened behind my back, to see the conversations that happened, to see what's included in the show; what's left out. For me its interesting to have certain things filled in a bit – stuff that I obviously would not have been aware of before.

When I spoke to Darren Maule last week he said he didn't like you a lot because you were too boring and non-commital and just wanted to sit and weave baskets and didn't want to seem as if you wanted to get involved. What was your strategy on the island and how you wanted to play the game?
You know what, I can't really say that I had a strategy. I guess I went in with a non-strategy. Which was to my low and basically see what evolved and respond to that and take it from there. So I wouldn't say that I wasn't committed. I just basically just have no need to fight for screen time. If people want to do their comedy riffs for the camera, fine. I had no need to do that. 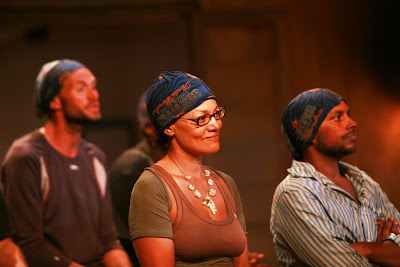 Did you think that you would be the next one getting voted out?
No absolutely not. Ha ha. No. I was totally blindsided.

How did you feel in that moment at tribal council when you're name started coming up?
You know, initially when – because I was expecting Proverb to be voted out and I was really emotional about that, because I really liked him –  I was emotional about him going. By the time my name was read the second time I . . .the penny dropped. I knew what was about to happen. This strange calmness came over me. Like ''ha - it's me.'' And its okay. Although I wouldn't have chosen to leave, there was a relief.

Now I just forgot my next question. In hindsight how would you have played the game differently?
Mmm. That's a really difficult question to answer because in order to – knowing what I know now – in order to play the game, I would have to lie and cheat and scheme and backstab and connive. Even though that is what the game requires, it's not really in my nature. It's difficult to say what I would have done differently because of the things I would have had to do to stay in the game.

Is there something that you have learned about yourself, or about life or about human nature through this experience?
It's difficult for me to look into someone's face and lie. I think the thing I've learned on the island is don't assume that it’s the same for other people. 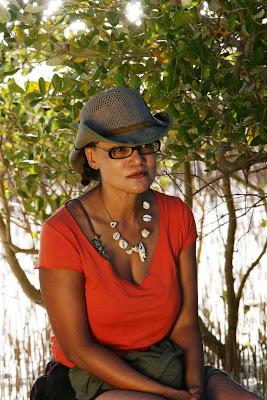 Sandi, then can you give viewers a heads up on who you think might still make it far in the game and why you think so.
Well, especially after what transpired with me being voted off, I think Ashley Hayden is playing the game really shrewdly. I think she came in with a strategy and she's playing it. The other person that I think was made for Survivor is Kas. He just blossomed on the island and I think he's going to go far – even though Proverb's name kept being mentioned as the person who was going to be voted off next, I think maybe he actually played everybody and maybe he'll go a long way.

And then Sandi the second last question is, is there something that viewers didn't see that you'd like to explain or would like to talk about to give a bit more context of what they would just have seen in Wednesday's hectic episode.
I think the main thing is, I come across as having not had much to say but the reality is I did have a lot to say and I did have a lot to contribute to the tribe in just our day to day survival and making our lives more comfortable and easier on the island. And yes, weaving baskets. Ha ha. And it looks like Cindy built the shelter all on her own. It absolutely was her idea and I think it was a brilliant idea, but she absolutely did not built it on her own. We worked our butts off building it.

The very last question, when you see the guys again at the live reunion is there something that you would like to say to somebody specific and what would that be?
We've actually seen each other already and no. I don't think so. I'm very aware of the nature of the game and that that was what we were there to do. So no.

And no regrets?
No.