A week later the untrustworthy DStv Now streaming service crashes again during the 2019 Rugby World Cup; MultiChoice again says it couldn't cope with the number of DStv subscribers trying to log in. 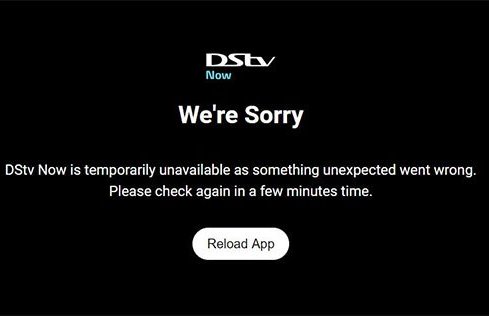 A week after the last crash, MultiChoice's untrustworthy and temperamental DStv Now again collapsed on Saturday, again during the 2019 Rugby World Cup featuring a match including South Africa, with MultiChoice again giving the same reason of being unable to cope with the number of DStv subscribers trying to log in.

Saturday's DStv Now blackout was the latest implosion of the service that keeps breaking with MultiChoice's Connected Video division, headed up by Niclas Ekdahl, struggling to provide adequate live concurrent streams capacity as MultiChoice works on launching a streaming-only version of its DStv pay-TV service before the end of 2019.

In response to a media enquiry on Saturday, MultiChoice on Saturday told TVwithThinus that the same problem again cropped up on Saturday with the pay-TV operator unable to handle the number of customers who tried to log in on DStv Now.

"We'd like to apologise to some of our DStv Now customers who were unable to access the platform for the Springbok Rugby World Cup match against Namibia," said MultiChoice.

"All DStv Now customers that were logged in ahead of the start of the match were able to view the game seamlessly, however there was a problem with the influx of fresh logins on the platform, which have to be individually verified, causing a delay in accessing the platform."

"We encourage our customers to try and logon to the platform during the match build ups, so that their access is not delayed by the login verification process, which is critical to ensure that our customers are able to have access to the platform that is specific to their entertainment requirements."


We continue to strive to ensure our customers’ user experience is not only personalized, but that access to their platform is also protected," MultiChoice said.
With the exact same problem again occuring, it means that MultiChoice did nothing - or too little - in the past week since the previous DStv Now implosion to fix the problem and to up the capacity of its video streaming service.
MultiChoice seems unable to handle large volumes of viewers on its rickety DStv Now app with MultiChoice technicians who have been unable for months to properly ensure adequate capacity, backups and functionality on the service.

In April with the debut of the final season of HBO's Game of Thrones on M-Net (DStv 101) DStv Now spectacularly crashed in South Africa and across sub-Saharan Africa, angering viewers who stayed up until 3:00 to watch the episode. It happened again in later weeks.

In mid-May MultiChoice once again saw DStv Now implode, with the breakdown once again happening during a big weekend viewing schedule.

On 12 May 2019 DStv subscribers missed the English Premier League final, The Voice South Africa on M-Net and other shows, three days after a botched "systems upgrade" on the preceding Thursday took down the entire service for hours, causing DStv Premium subscribers to miss the finale of The Bachelor SA on M-Net.

so the dstv now problems are forever???
every high sporting events dstv now goes down. what's the use of it if we always get problems when we want to watch the main sporting events?
— #Defend_Mkhwebane (@GodfreyLetlalo) September 28, 2019

@DStvCare I want my refund, Netflix should teach Dstv how to provide a good customer experience
— Ashir Manilall (@ManilallAshir) September 28, 2019

@DStv now is down again. You had this issue last week did you learn nothing!? I've been trying to login since 10:30 and had the same 'DSTv now is temporarily unavailable...' message for 50 minutes
— Sasha Abramowitz (@sMashaZa) September 28, 2019

Thanks DSTV... no idea why I even have a premium subscription anymore. @DStv pic.twitter.com/aimqGPNUdY
— nicole (@NicoleV_01) September 28, 2019

So apparently @DStv learned nothing from last week's fiasko of Dstv Now not working during the rugby.
— Rikus le Roux (@RikusleRoux) September 28, 2019

@DStv it's very frustrating trying to watch the rugby on dstv now when it keeps freezing every 2 seconds..its the world cup, surely Dstv has made provision for an overload of people trying to watch the game online? The first game was a no go as dstv now wasnt even working
— Caroline young (@carolineyoung03) September 28, 2019

@DStv... your DSTV now service is useless as usual. Why am I paying for premium? if all I get is error messages. Ruining #RSAvNAM for me! pic.twitter.com/58V3XBLNHy
— Angelique Shekleton (@Ang_Sheks) September 28, 2019

100mb line and streaming on @dstv looks like im streaming on dial up half the time... disappointing.
— Darryl B (@DarrylBamberger) September 28, 2019