Netflix commissions its first-ever African animation series, Mama K's Team 4 from Triggerfish Animation Studios in South Africa and set in a futuristic Zambia; now looking for specifically female writers from across Africa to write the scripts. 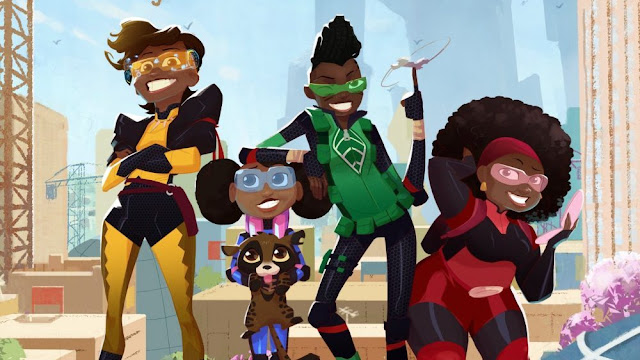 Netflix has commissioned its first original African animated series, Mama K’s Team 4., produced by the Triggerfish Animation Studios in Cape Town, South Africa as well as CAKE in London in the United Kingdom, following four diverse black girls in a futuristic version of Lusaka, Zambia, trying to save the world after they're recruited by a retired secret agent.

Mama K’s Team 4 was created by the Zambian writer Malenga Mulendema, one of 8 winners in the Triggerfish Story Lab initiative competition in 2015, and are drawn by the Cameroon artist Malcolm Wope, taking inspiration from retro 1990s  R&B and hip-hop girl groups.

Triggerfish Animation Studios and CAKE is now looking for specifically female writers across Africa as part of a pan-African writing talent search to become the writers of Mama K’s Team 4 .

"In creating a superhero show set in Lusaka, I hope to introduce the world to four strong African girls who save the day in their own fun and crazy way. Most importantly, I want to illustrate that anyone from anywhere can be a superhero," says Malenga Mulendema.

Melissa Cobb, vice president of original animation at Netflix, says "In addition to giving African writers a global platform on which to be heard, we are excited to present this powerful and entertaining new animated series that brings Malenga's incredible and unique vision to life on Netflix".

"Mama K's Team 4 has the potential to give a whole new generation of African children the opportunity to see themselves on-screen in the powerful, aspirational characters they look up to."
on 3:08:00 PM