A flood of tears as Ewan Strydom leaves SABC3's Expresso after 8 years in highly-emotional farewell and co-hosts say: 'You've been the best part of our mornings'. 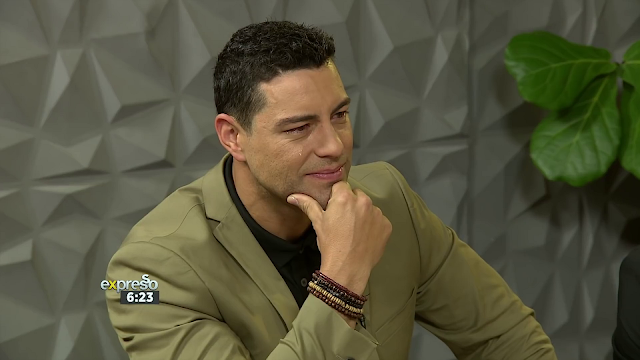 Tears unashamedly streamed down his face on Tuesday morning as Ewan Strydom bid goodbye as a TV presenter of SABC3's morning show Expresso 8 and a half years after he joined the Cape Town based lifestyle show, as his co-hosts shared moving messages in a highly-emotional on-air farewell.

Tuesday was announced as his last day on air with Ewan Strydom who teared up when his co-presenters shared final goodbye messages during this morning's broadcast, along with a tribute lookback including clips that were played.

The various goodbye on-air messages on Tuesday on SABC3's Expresso made for extremely compelling and moving morning television.

The energetic and friendly Ewan Strydom is one of the remaining original presenters together with Katlego Maboe and Leigh-Anne Williams who are both still with the show, when it made its debut, done from The Equinox Building in Sea Point since 4 October 2010 as a new live breakfast show on SABC3.

Before joining Expresso, Ewan Strydom was part of M-Net's All Access weekly magazine show produced from Cape Town before it got cancelled.

During his time with the programme he also became a dad of two.

No reason for Ewan Strydom's departure from Expresso was given on Tuesday but Cardova responsible for the show issued a statement through SABC3 to TVwithThinus later in response to a media enquiry, saying "Expresso bids farewell to Ewan Strydom and wishes him all the best with his future ventures". 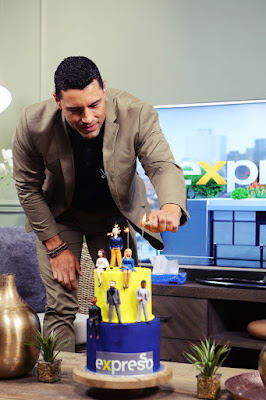 "After almost 9 years on the Safta award-winning Expresso, Ewan Strydom is leaving the programme to pursue other business ventures."

The show said "Ewan was one of the first of a line of presenters who have been crafted into quality live and field reporters on the popular breakfast programme, including those who won their places on the show through the rigorous audition process of Presenter Search on 3, which introduced the likes of Zoe Brown, Thabiso Makhubela and Mosa Kaiser to Expresso viewers".

"Cardova Productions and the Expresso morning show recognise the hard work Ewan has invested in helping the show grow to where it is today, and appreciate the positive feel-good attitude that Ewan has always displayed, on and off camera. We wish him all the best with his future endeavours".

"I don't know how we're going to do Expresso without you. I feel Expresso is you. But you have been the best part of our mornings," said Leigh-Anne Williams who described Tuesday as "a bitter-sweet day".

"You are one of the most incredible people we will ever know in this lifetime. You are as real off-screen as you are on-screen," said Leigh-Anne Williams.

Katlego Maboe mentioned how he was "On this journey with you since day one when this studio was nothing but rubble and cement bags and kruiwaens".

"In such a massive way over the years you have been my support in so many of the life challenges that I've gone through." Katlego Maboe said "there's no way that I could ever have done this without you. Thank you for your friendship. From my heart, thank you."

Graeme Richards said "I can't tell you how much you mean to me; how much you mean to everyone here. Everyone is a little bit broken because you are just honestly one of the most authentic, genuine guys." He said "this bond, and this connection - nothing will ever affect that".

"You guys are family man, you guys are my family," said Ewan Strydom.

As Tuesday's end credits rolled and his voice wavering, Ewan Strydom said "It's incredibly difficult to say goodbye. I will miss you all dearly. You are my family. You've become my world. I don't know how to do this. I'm not a crier. But it's been a journey that I will never forget."

"It's been an incredible past couple of years. I treasure so much you guys who became the closest people in my life. And the thought of having to say goodbye and not spending the mornings with you is heartbreaking for me. It really is."

"To you at home as well, thank you for allowing me into your homes every single morning."