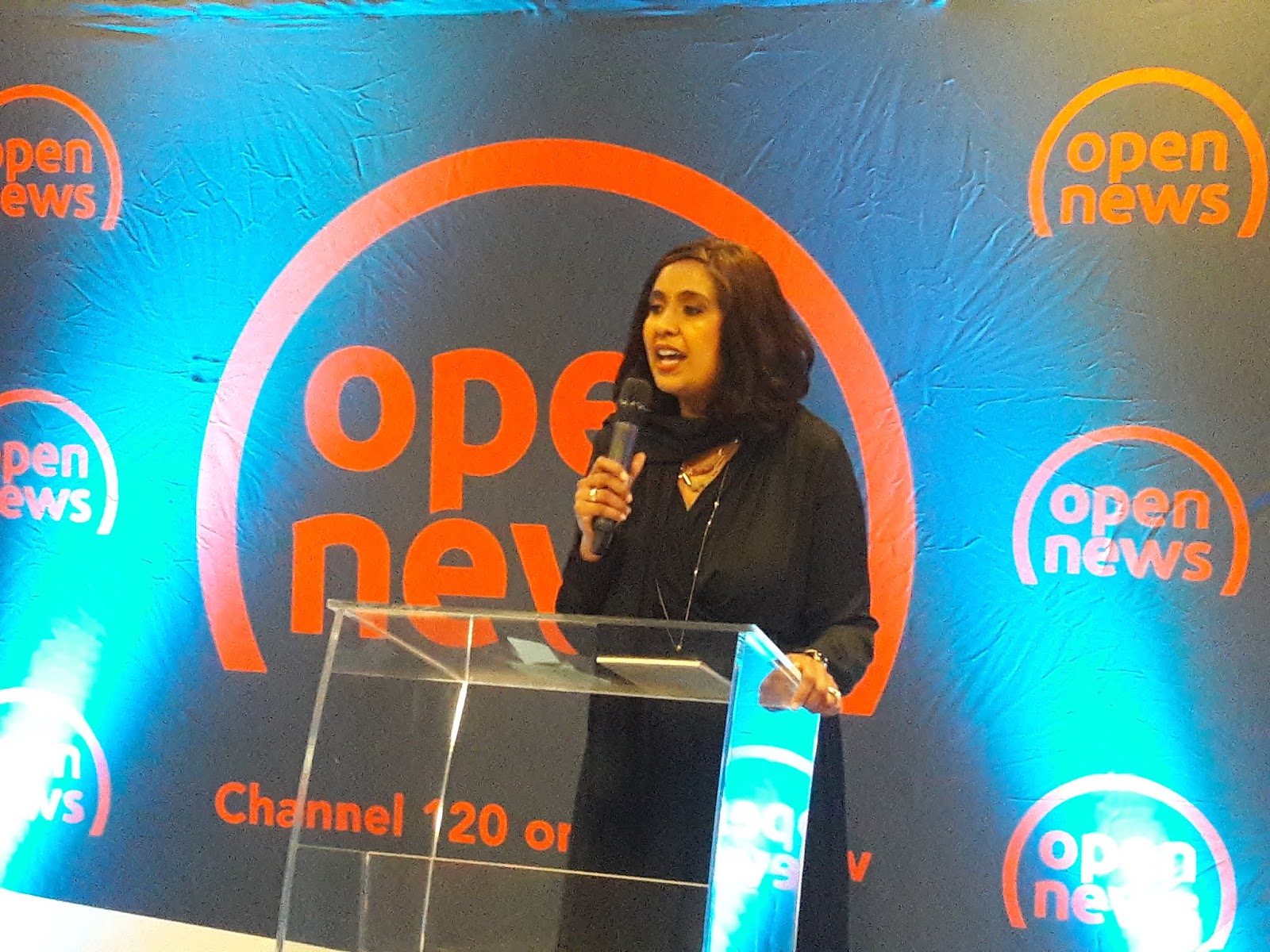 The Open News boss, Nisa Allie, says South Africa's new free-to-air TV news channel from eMedia will use cellphones as the primary tool to capture video content, that on Open News the news anchors will give their opinions and are encouraged to ad lib, and that the channel will bring viewers social media news that's trending.

"The concept behind Open News - you will see that there are some studio crew visible in some shots - we don't want to talk down to people, we want our viewers to feel engaged," said Nisa Allie, Open News managing director.

"We want our staff to be a part of our overall offering, and to give the sense that we are approachable and that people can engage with us."

Nisa Allie spoke at the official Open News launch event at the Cape Town head office of eMedia Investments in Zonnebloem where the Open News studio has been built and that also houses sister operations like e.tv, eNews, eNCA, eNuus and Nuusdag.

Although not directly, Open News will compete with eNCA (DStv 403), supplied by eMedia to MultiChoice's DStv satellite pay-TV platform, as well as the South African public broadcaster's SABC News (DStv 404), and the to-be-launched Newzroom Afrika that will take the placeof the shuttered Afro Worldview in early-2019.

"Open News is a combination of the old and the new. The old - in that we hold the same ideals as our colleagues in the rest of the media do. The new - in that we've hired a team of young journalists, talented journalists, who are using the latest technology to bring you the news from all of the locations across South Africa that they come from," said Nisa Allie.

"They'll be using cellphones as their primary source to film their content and in doing so, it's changed the way in which we view content."

"I think that while traditionally, we enjoy the beautifully crafted TV news video, the reality is that most of us consume anything that is riveting, regardless of the format it is in."

"The old - our team of editorial staff and our young staff will be guided by people who have been in this industry and who have seen this industry evolve over the years." 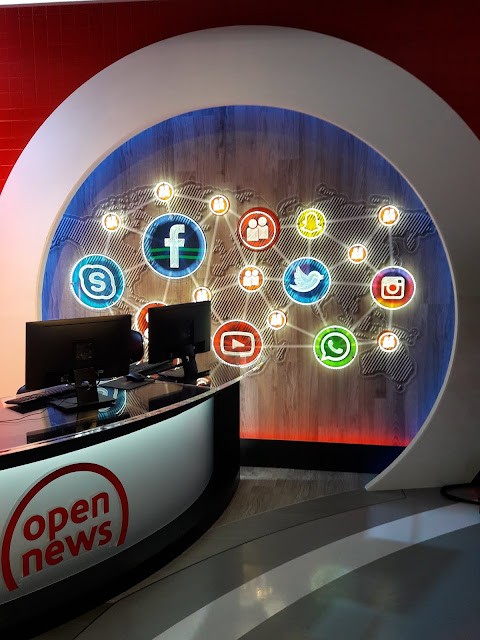 "Social media has presented itself as a challenge to our industry. In the traditional space there are discussions around 'Do we break it on Twitter or do we wait for our traditional platform to break the news?' The reality is, it is a form of communication that is not going anywhere."

"As a journalist there are many times that we think we're interested in a debate around something specific. You go onto Twitter and then there is everything else but that."

"I'm not saying that we should be leading with the latest in entertainment news every single day. But the reality is that there's a conversation taking place there that nobody is giving the attention that it deserves."

"Twitter and social media present itself with risk - there are some crazy people on Twitter. There are all sorts of fake accounts. There are people who are trying to push a particular narrative. The Open News editorial team  - and especially the old guard - we are aware of the risk that is poses. We discuss regularly how to circumnavigate the risk and challenges that it poses," said Nisa Allie.

"The positive aspects of social media is that you can gauge how interested people are in a particular subject, which other question they would prefer be asked and answered. Ultimately we're looking to find a safe middle-ground in the TV and the social media space."

"There is a television audience which is being ignored in this country. I would say that the talk radio space does really well in engaging people to that extent. We believe that that audience is looking for a greater space in which to voice their opinions, in which to engage and we're hoping to offer that." 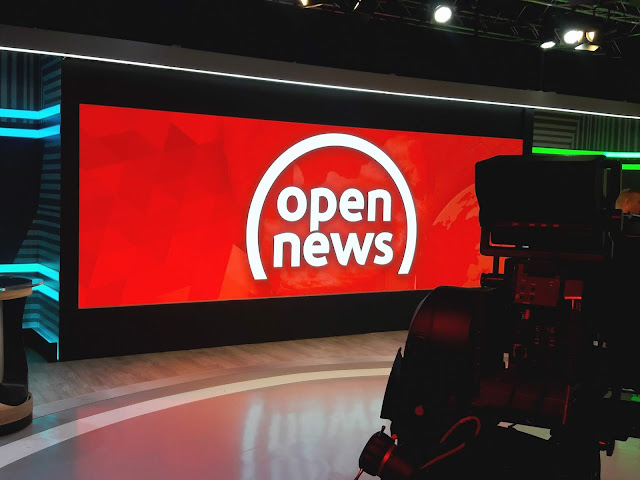 "In terms of opinion - I know, journalists' eyes would be popping at the idea of opinion. And again, we are aware that 'my opinion is very different to yours'. What is important to us, is surrounding ourselves with people who have differing opinions."

"Ultimately the illusion that is created that we do not have opinions are incorrect. We do not want to be controversial. We do not want to be controversial for the sake of being controversial. We want to take the essence of what is being discussed everywhere - be it in a newsroom, be it in parliament, be it at the braai over the weekend - we want to take those and we want to bring them to life. We want South Africans to engage in a television space in regard to those subject matters." 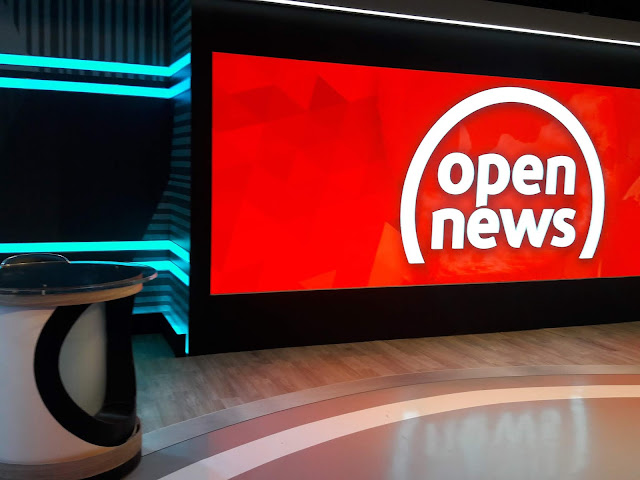 "We do not want to compete with anyone. We want to be unique and true to be who it is that we are. They will be criticised, we will be criticised. We are aware of that. All I want to urge is that you give us the opportunity to prove who we are," said Nisa Allie.

"We need our viewers to be open-minded. Everything that you see, everything that you hear, the story-selection is very far from the 8pm news that we grew up watching. We do believe there is a section of this population that is not being catered to in regards to news."

"It's not just the 6 hours of Open News that makes this channel work. We're on air between 17:00 and 23:00 Mondays to Fridays. Around that time we have partnered with 3 international broadcasters who are providing us with high-quality content - they are TRT World (Turkey), CGTN (China) and France24."

"We will also be simulcasting the 13:00 bulletin from our sister channel e.tv. We hope that with that variety, our Openview audience and our Openview market is being catered for, that what they've been asking for for a very long time, that their pleas have not fallen on deaf ears."

"In time to come, who knows where the 6 hours may go."