As Sky in Britain teams up with Netflix from November, how long until MultiChoice strikes a deal with Netflix SA to be made available to DStv subscribers? 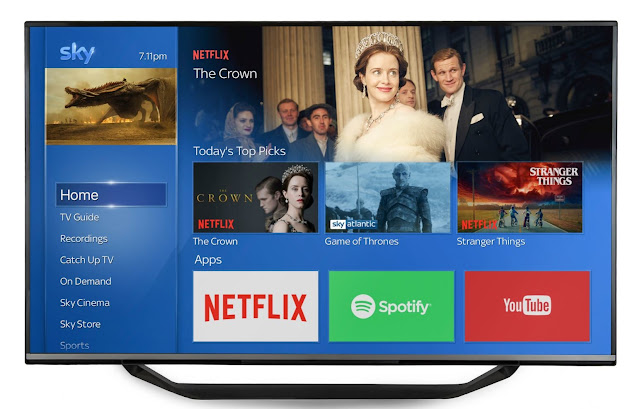 As pay-TV operator Sky in the United Kingdom announced that it will be teaming up with Netflix from November for its new subscription package, it raises questions as to when Naspers' MultiChoice's might reach out and team up for a deal to make Netflix South Africa's offering available on DStv.

MultiChoice and M-Net over the past decade have closely mirrored Sky's service, innovations and self-packaged Sky channels plan for South Africa and Africa, raising the possibility that similar to what Sky in the UK and Comcast in the United States are now doing by linking up with Netflix, the global streaming giant's service could maybe be added for South African DStv subscribers as well.

Sky announced that Netflix is coming to its Sky Q and new subscription package "Ultimate On Demand" from November.

As part of a new seamless package, Sky subscribers will be able to get all of Sky's original productions, American series like HBO’s Game of Thrones and Showtime’s Billions, alongside Netflix’s original dramas, films, comedies and documentaries, like The Crown, Stranger Things, The Kissing Booth, Making a Murderer and Queer Eye.

Sky in a statement says "this integration means it'll be easier than ever to find what you love and discover hidden gems".

"We want Sky Q to be the number one destination for TV fans. Partnering with Netflix means we will have all the best TV in one great value pack, making it even easier for you to watch all of your favourite shows," says Stephen van Rooyen, Sky UK CEO.

Chris Whiteley, Netflix UK director for business development, says "Innovation is at the core of Netflix. We are delighted to partner with Sky to offer fans a new and exciting way to access the best of entertainment from around the world."

Payment for the new Netflix pack will be added to customers' monthly Sky bills, making it easier than ever to sign up and removing the need for separate payments for each service.

South African pay-TV customers are now wondering when this innovation might be given to them, with MultiChoice that currently only bundles Naspers' subscription-video-on-demand (SVOD) Showmax for free to DStv Premium subscribers.

DStv Premium subscribers as a percentage of MultiChoice's overall subscriber base keeps falling as people no longer see DStv Premium as offering enough value to make the monthly price worthwhile.

According to MultiChoice the free Showmax offer will expire on 31 March 2019 after which DStv subscribers will have to cancel it or pay an additional fee. Showmax, together with DStv Now, is currently being run under the Connected Video unit.

In May 2018 TVwithThinus asked Calvo Mawela, MultiChoice South Africa CEO why the pay-TV operator is not giving DStv subscribers access to Netflix in the way Showmax is made available, and in the way Britain and America's leading pay-TV services are now doing.

Calvo Mawela said MultiChoice is currently treating Netflix South Africa as "pure competition", and that although it hasn't yet engaged with Netflix over a possible partnership, that it is studying what's happening and is open to possible opportunities.

"We are following and making observations around what's happening in the rest of the world in terms of traditional pay-TV operators and how they engage with Netflix," Calvo Mawela said.

"We also recognise the kind of partnership they've done with Sky and as a business we are open to anything that will make commercial sense to us."

"However, we have not gone and engaged with Netflix at this stage. All we are saying at this present moment is we are competing with Netflix, hence we launched Showmax for us to capture that market."

"At the moment we treat Netflix as pure competition," said Calvo Mawela. "And we are trying to build Showmax to be able to compete with Netflix."

Naspers is set to spin-off MultiChoice in the first half of 2019 as its own MultiChoice Group company listed on the Johannesburg Stock Exchange (JSE).

While streaming services like Showmax, Netflix SA and Amazon Prime Video are growing fast in South Africa it's from a very small base.

While MultiChoice had 13.5 million DStv and GOtv subscribers by the end of March 2018, latest research from New York's Pivotal Research Group projects that Netflix will have just 500 000 subscribers by 2020 in South Africa and across the rest of Africa combined.
on 12:12:00 PM