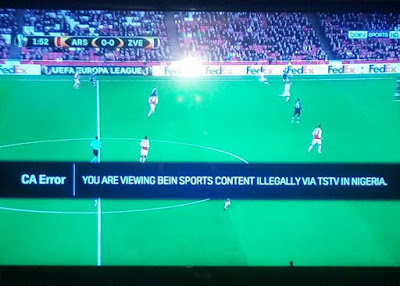 As the fraudulent Nigerian pay-TV upstart TStv illegally keeps stealing TV signals it has no right or contracts to, Qatar's beIN Media Group on Thursday night ran a conditional access (CA) bar notification on the pirated sport channels signal to tell TStv viewers that they're watching illegal content before the channels went black.

Dumb and foolhardy Nigerian consumers still believe Telcomm Satellite TV, that has now twice missed its own-set commercial starting dates that it announced and that came and went, that made shockingly fake claims about a litany of TV channels it doesn't actually have and won't since it has no carriage agreements with channel providers.

The lying TStv based in a green building in Abuja, Nigeria, with CEO Bright Echefu, keeps being dishonest to consumers. 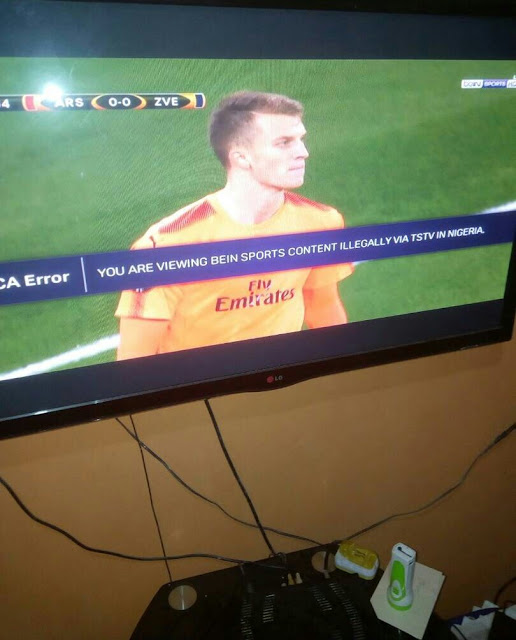 TStv further lies by promising that it will show sports like English Premier League (EPL), La Liga and even the UEFA Champions League - sub-Saharan rights already signed and acquired by MultiChoice, MultiChoice Africa and SuperSport years ago and for years into the future in multi-year contracts.

It means that the pay-TV rights to several of these soccer tournaments are exclusive to DStv in sub-Saharan Africa and is not allowed to be broadcast on other pay-TV operators' services.

Further questions are swirling around channels like Scripps Networks Interactive's Fine Living, Fashion One, Trace's TRACE Africa, and AMC International's kids channel Jim Jam who are yet to respond whether they have carriage agreements with TStv as TStv claimed.

On Wednesday TVwithThinus again confirmed with beIN Media Group in Qatar that no agreement exists.

beIN Media Group sent TStv a cease-and-desist letter in late-September but TStv has blatantly ignored it and continued to broadcast beIN Sports channels in Arabic - something it's not allowed to do.