FALLING SKIES. The second season of Falling Skies on Fox Entertainment finds Tom inside an alien ship getting a proposal. 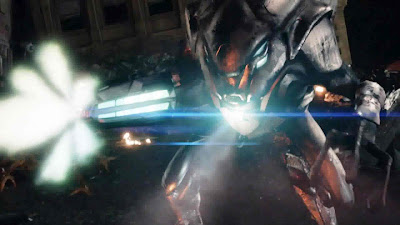 I've just finished watching the first episode of the second season of the science fiction drama Falling Skies which will start in America on 17 June and in South Africa on Fox Entertainment (TopTV 180) on on Monday 2 July at 20:15 and all I can say is ... awesome!

I just finished watching the online screener of the first brand-new episode (thanks Fox International Channels Africa) which was made available today and although I'm going to keep my review - and the full revelations - in the first episode of the second season until a bit later, I will spill a few non-spoilers of what I've just seen.

"We've studied you in great detail, professor. We've drawn from that a proposal that will end hostilities between us."

Those are the chilling words from the alien (spoken through not the alien) when professor Tom Mason comes face to face with the aliens inside the alien ship. Viewers will remember that the first season of Falling Skies ended with Tom Mason being visited by one of the alien creatures and asked to come to their one ship. 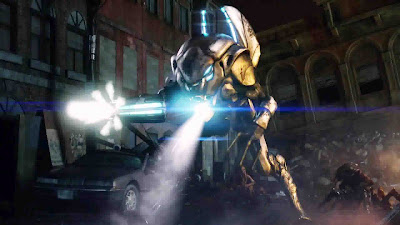 The first episode of the second season of Falling Skies contains extensive scenes taking place inside the alien ship - somewhat resembling in appearance the Hive ships from Stargate Atlantis. Oh, and the alien makes Tom Mason - and by implication mankind - a proposal (which I won't reveal for now).

Somebody's Harley gets destroyed, the aliens have developed a new way of tracking humans, and there's one word (actually two!) that you would have heard in Star Trek ... the "neutral zone"! All the so-far known types of aliens are going to be seen, very clearly, in daylight, as well as an alien ship in the first episode.

Also Tom Mason (when he gets "released") is nowhere close to Boston, so he has to try and make his way back there.

More later, but all I can say for now is that the start of the second season of Falling Skies remains good primetime television if you like drama and like science fiction.
on 12:01:00 AM