REVEALED! How the SABC's beautiful new high gloss set at the SABC Broadcast Centre will look for its World Cup 2010 TV coverage. 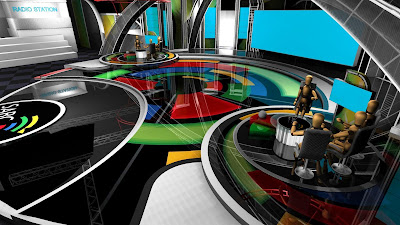 I can not only show you these wonderful artist impressions and terrific set design schematics, but I can also tell you more about the SABC's massive and beautifully-designed new high gloss set at the SABC Broadcast Centre that will be used to cover the 2010 FIFA World Cup from mid-June.

The set that is currently being constructed at the SABC Broadcast Centre at the Sandton Convention Centre and designed by De Wet Meyer of JDM Unlimited for the SABC, is the beautiful centrepoint of the South African public broadcaster's upcoming World Cup coverage. This showcase multi-level set at the SABC Broadcast Centre will serve as the main TV studio for the SABC's World Cup coverage.

For more great images revealing the set design as well as information about it all, click on READ MORE below.

This is how the massive and beautiful new set of the SABC will look - when construction is finished in early June - as the main on-air focus point for the South African public broadcaster's TV coverage for the upcoming 2010 FIFA World Cup.

This beautiful set, designed by De Wet Meyer from JDM Unlimited for the SABC ''should be standing at the SABC Broadcast Centre from around June 7 or June 8,'' says Trudy Mackay. ''We will do a final technical check - lighting and such from then and we're hoping to have it in technical operation from June 8 and 9. We're hoping to use the set already by June 10 and on June 11 we go live with the set from the SABC Broadcast Centre,'' she tells me.

As you can see the high gloss set with a lot of aluminium, incorporates the SABC logo, as well as the SABc's logo colours into the main circular set design which has a circular theme. The circular theme is build up out of four circles with a multi-level design where anchors, presenters, analysts and on-air guests will be able to stand, move around and sit.

''With this magnificent set at the SABC Broadcast Centre designed and built specially for the SABC's TV coverage of the 2010 FIFA World Cup, we want to show the SABC as being professional and as a broadcaster that can compete with the best of the world,'' Trudy Mackay tells me. ''We went for a multi-level set approach. Hopefully it will blow viewers away. We want to show that this is not just your ordinary TV coverage - we want to show that this is a world event. We went in terms of finishings for a high gloss look; a lot of aluminium - we were very specific about what we wanted. We want the set to be an interactive broadcast and studio experience.'' 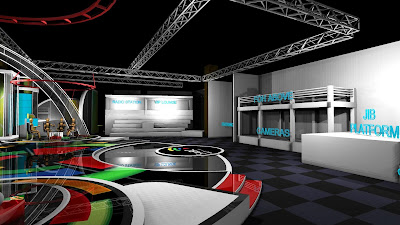 Besides the on-air talent the centrepiece set also has room for VIP visitors and capacity for 140 special guests at a time who would be able to experience the broadcast from the studio in special ''audience tiered seating'', as well as the screening of games - ''hence the big screens'', says Trudy Mackay.

SABC1's daily Good Morning Mzansi and Good Evening Mzansi magazine shows are just some of the TV broadcasts that will be done from this set. that also incorporates two radio broadcast studios for live radio broadcasts. Cameras include 18 cameras, two Jimmy Jibs and 2 steady cameras. 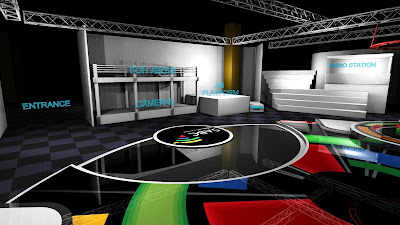