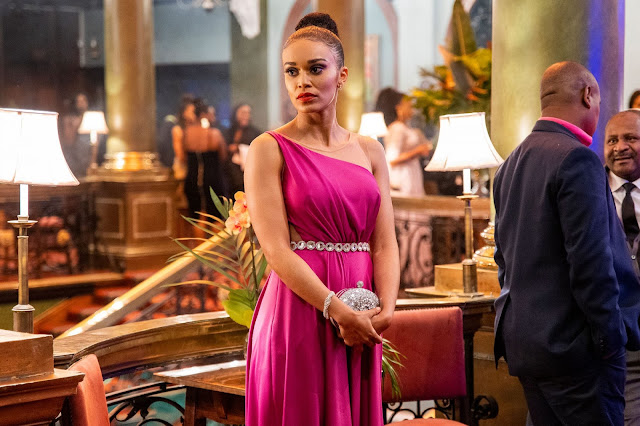 Long story short: You've seen all of this already years before streaming services like Netflix came along.

Netflix's first local African commissioned series, created by director Kagiso Lediga and Tamsin Andersson's production company Diprente comes up short in several areas with wooden acting, pacing issues and other problems that detract from Queen Sono's 6-episode first season (no word on whether there will be more).

Visually Queen Sono has some moments of wonderful travelogue-like cinematography but overall the first season - with showrunner Kagiso and Tebogo Malope who took turns to direct episodes - is missable fare and lacking a binge-watching quality.

On its own Queen Sono sadly isn't worthy of a Netflix subscription or worth the data, time and gawk-interest as the "first African Netflix Original" with an ever-present unevenness across the season and a lot of padding and badly done exposition all through the first three episodes.

The story takes too long to get going for a property that was created to live on a streaming service where it should inspire a "I can't wait to watch more" feeling. The scriptwriting and fragmented plot are served lukewarm given the rich potential available in the story matter and themes that Queen Sono tries to weave into the episodes.

Change some of the names, places and faces (and diamonds for weapons) and Queen Sono looks like a cluttered Trackers Repeat with a plopped-in Bambi-like, cynical protagonist who this time is a field agent (channelled by Pearl) at the fictional Special Operations Group (SOG) of the South African government. Queen is searching for the killer of her mother Safiya.

On an interesting meta-level Queen is investigating a foreign company's incursion into Africa and trying to figure out what it all means and how the outside interests in Africa are connected. It's similar to Netflix itself and its global streaming aspirations and why Netflix spent money to create Queen Sono in the first place.

Amidst a seesaw of sappy melodrama and action scenes, Queen Sono peppers the often-odd and awkward dialogue with obviously forced and weird "F"-words and things that people won't say in front of grandma - as if to somehow try and emphasise that the series isn't your regular SABC1 Sunday night drama.

The sound design and jarring soundtrack transitions is another production pitfall and also needed some more refinement in studio in post. It's simply all over the place. Among the often stilted portrayals in Queen Sono, especially Sechaba Morojele as Dr Sid and other actors with distracting and changing accents, there are some gems. Bright sparks include the acting chops of James Ngcobo.

Queen Sono is additive but not groundbreaking and sadly not stand-out in any way besides that it will have a footnote in the TV history books as "the first African Netflix Original".

The dreary, tedious and drawn-out quality of Queen Sono is as disappointing as what The Girl from St. Agnes was as MultiChoice's first Showmax Original and unfortunately doesn't live up to the hype that Netflix probably hoped there would be around it's first original South African series.

Maybe give it a try if you already have Netflix - although you'll probably struggle to sit through and watch the entire 6 episodes - but don't waste money buying a Netflix subscription just because of it. It's not actually worth it.

As Netflix does more African commissioned series it will probably, hopefully, do better in future.
on 1:03:00 PM