eNCA silent after reporter Samkele Maseko reveals allegations of Hyde Park censorship by news boss Kanthan Pillay and how he was 'thrown out of the eNCA building like a dog'. 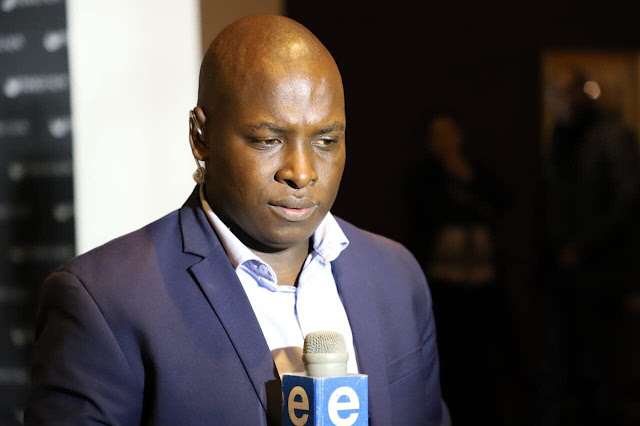 eNCA is silent after political reporter Samkele Maseko, a day after his resignation, detailed allegations of shocking censorship inside the TV news channel by its new news boss Kanthan Pillay, and how he was apparently "thrown out of the eNCA building like a dog".

The eNCA (DStv 403) political reporter Samkele Maseko is abruptly gone from the TV news channel after he resigned on Tuesday. He apologised to his now-former eNCA colleagues for not saying goodbye after handing in his resignation on Tuesday.

There's been no statement from eNCA about Samkele Maseko's exit.

It's not yet clear where Samkele Maseko is going to although rival channels like SABC News (DStv 404) and Newzroom Afrika (DStv 405) are options and have been headhunting eNCA staffers, especially Newzroom Africa that has been expanding its own operations.

Following his resignation, Samkele Maseko on social media slammed Kanthan Pillay, eNCA's new head of news who was the founder and leader of the Capitalist Party of South Africa (ZACP), known as the "Purple Cows".

"Do want me to speak about how you threw me out of the eNCA building like a dog who had stolen something. How you came to my desk and said I should pack my shit and follow you to HR. You are heartless and unethical. Denying some a chance to serve a notice period".

In a media enquiry eNCA publicist Lerato Maleto and eNCA editor Jeremy Maggs were asked for a statement regarding Samkele Maseko's resignation but the news channel didn't respond at the time of publication.

eNCA was also asked about the various individual allegations Samkele Maseko made regarding newsroom censorship and interference by Kanthan Pillay but there's been no response from the channel so far.

The South African National Editors' Forum (Sanef) in a statement says that it is "deeply concerned by allegations from former senior eNCA journalist Samkele Maseko that eNCA’s Kanthan Pillay had censored stories in the newsroom".

"The censoring of journalists who report in ethical and responsible ways is anathema in our industry and should always be strongly condemned."

Sanef wants to meet with eNCA management and wants clarity on what exactly Kanthan Pillay's involvement and position within eNCA is.

"We welcome the fact that Samkele Maseko has agreed to approach Judge Kathleen Satchwell and the Media Ethics and Credibility Inquiry to discuss these issues further."

Sanef says it's calling on all editors, media owners and newsroom executives to guard against all instances of editorial interference in newsrooms and to allow journalists to continue with their work in a responsible and ethical manner.

Meanwhile the EFF political party is calling for a boycott of eNCA in support of Samkele Maseko, as well as the eNCA reporter Khayelihle Khumalo who was allegedly suspended by eNCA management for tweeting in his personal capacity about the EFF elective conference of the past weekend.

"The EFF condemns the eNCA for its racist treatment of African journalists. In a tweet, one of its managers called a journalist, Samkele Maseko, a rat on social media, after firing him," the EFF says in its statement.

"We also have reliable information that eNCA placed Khayelihle Khumalo under suspension for tweeting about the EFF Second National People’s Assembly (NPA) from his personal account. The EFF condemns these actions as a sign of total deterioration of leadership, principles and ethics within the eNCA. In fact, when it comes to the EFF, the institution has become personal."

"South Africans must unite in totally boycotting eNCA, both from watching it and attending to its news requests and events. No one must call an African child a rat in our country and it just becomes business as usual."

The ANC political party's national youth task team (NYTT) in a statement slams eNCA and Kanthan Pillay over the allegations of newsroom censorship.

"The mistreatment of journalists is draconian behaviour, and it is something neither accepted, nor condoned by the ANC NYTT."

"Such behaviour by eNCA and its head of news toward Samkele Maseko is extremely unacceptable. Unfair labour practice against journalists is tantamount to an assault on media freedom and democracy."

The ANC political party in a statement calls allegations of editorial interference and the mistreatment of journalists at eNCA "tantamount to nothing but censorship".

"We are particularly appalled and shocked by the channel's head of news, Kanthan Pillay, for likening the journalists to rats in his response to Samkele Maseko's tweets. This is a gross violation of human rights."

The ANC says Kanthan Pillay "should conduct himself in a manner that upholds constitutional democracy at all times" and wants to see relevant authorities "embark on a market analysis process at eNCA to probe issues such as racism and pay parity at the station".

The SACP in a statement demands that eNCA fire Kanthan Pillay.

"This racist reaction is an insult to Africans in particular. It is completely unacceptable and must have no place in our society. The SACP condemns it in the strongest terms possible."

"eNCA must apologise to South Africans, get to the bottom of the matter and get rid of Pillay. The SACP will continue pushing media transformation and the struggle for a non-racial society."


ALSO READ: eNCA fires politician-turned-news boss Kanthan Pillay after allegations of censorship and racism, 'had no alternative but to end the relationship with him'.
ALSO READ: eNCA editor Jeremy Maggs tells staffers 'today has been a profoundly unpleasant day for all' as eNCA credibility crisis grows after reporter Samkele Maseko reveals censorship allegations; politician-turned-news-boss Kanthan Pillay forced to apologise for 'irresponsible and unbecoming' actions.
ALSO READ: eNCA reporter Samkele Maseko abruptly gone after resignation, apologises to colleagues for not saying goodbye.
on 11:03:00 AM