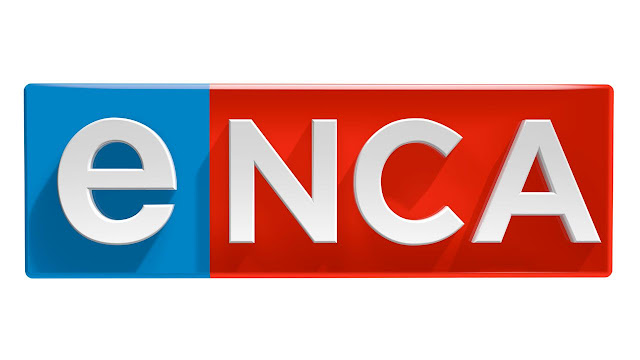 As eNCA's credibility crisis escalates and the reputational damage grows after newsroom animosity at the South African TV news channel burst into public view, editor Jeremy Maggs on Thursday evening in an internal memo to staffers called it "a profoundly unpleasant day for all of us on the channel" and said that eNCA won't be making any public statements while the ugly backstage newsroom drama "is playing out". 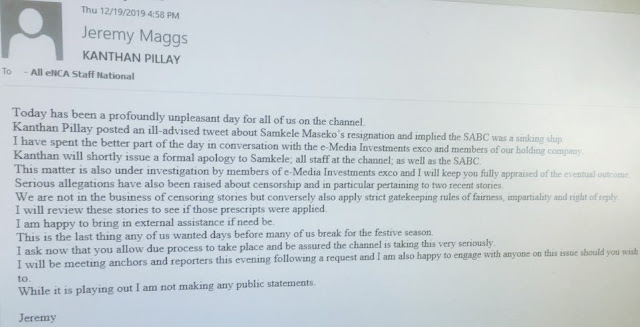 TVwithThinus asked eNCA why it appointed Kanthan Pillay, the founder and leader of the Capitalist Party of South Africa (ZACP), known as the "Purple Cows" in a senior news management position at eMedia as well as for comment about the various allegations regarding news censorship that Samkele Maseko made.

"Do want me to speak about how you threw me out of the eNCA building like a dog who had stolen something. How you came to my desk and said I should pack my shit and follow you to HR. You are heartless and unethical," said Samkele Maseko.

In his internal email to staffers Jeremy Maggs said "Kanthan Pillay posted an ill-advised tweet about Samkele Maseko's resignation and implied the SABC was a sinking ship. I've spent the better part of the day in conversation with the eMedia Investments exco and members of our holding company. Kanthan will shortly issue a formal apology to Samhele; all staff at the channel, as well as the SABC".

"This matter is also under investigation by members of eMedia Investments exco and I will keep you fully appraised of the eventual outcome. Serious allegations have also been raised about censorship and in particular pertaining to two recent stories," Jeremy Maggs wrote.

"We are not in the business of censoring stories but conversely also apply strict gatekeeping rules of fairness, impartiality and right of reply. I will review these stories to see if those prescripts were applied."

"I am happy to bring in external assistance if need be."

Jeremy Maggs writes to all eNCA staff nationally that "This is the last thing any of us wanted days before many of us break for the festive season. I ask now that you allow due process to take place and be assued the channel is taking this very seriously."

"I will be meeting anchors and reporters this evening following a request and I am also happy to engage with anyone on this issue should you wish to. While it is playing out I am not making any public statements," Jeremy Maggs wrote. 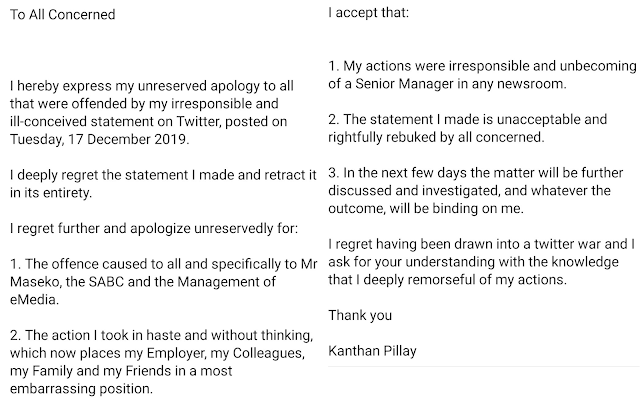 Meanwhile Kathan Pillay has been forced to write a separate apology to all eNCA staffers, writing that his actions "were irresponsible and unbecoming of a senior manager in any newsroom" and that he is apologising for his "irresponsible and ill-conceived statement on Twitter" and "the offence caused to all and specifically to Samkele Maseko, the SABC and the management of eMedia".

Stella Ndabeni-Abrahams, South Africa's current minister of communications, says "If what is going on at eNCA is true,it is a concern to any policymaker in a country,"

"Let there be freedom of expression, let people be treated fairly, let us make sure that there is no bias. If what is trending out there is true, we are concerned."


ALSO READ: eNCA fires politician-turned-news boss Kanthan Pillay after allegations of censorship and racism, 'had no alternative but to end the relationship with him'.
ALSO READ: eNCA silent after reporter Samkele Maseko reveals allegations of Hyde Park censorship by news boss Kanthan Pillay and how he was 'thrown out of the eNCA building like a dog'.
ALSO READ: eNCA reporter Samkele Maseko abruptly gone after resignation, apologises to colleagues for not saying goodbye.
on 6:48:00 PM