After days the struggling Cell C now admits that it yanked all its TV channels as its Cell C black streaming service is cut down; first said that the black blackout is because of 'difficulties' that its IT division is trying to resolve.

With chaos inside the struggling and cash-strapped Cell C, the company on Tuesday finally admitted after days of no answers that it had to cut all its TV channels from its Cell C black video streaming service that is being downsized, after first saying the Cell C black blackout is because of "difficulties" that its IT division is "trying to resolve in a timely manner".

Cell C black started to apologise "for the blackout you're currently experiencing" just before the past weekend when Cell C black customers were confronted with a sad face emoji on-screen message instead of the carousel of live linear TV channels on the service.

In a note to scared Cell C black customers that TVwithThinus obtained, Cell C told concerned Cell C black subscribers to "kindly note that there is a current technical disruption with all live TV channels on the black portal".

"We humbly apologise for the inconvenience and would like to assure you that your black experience is important to us. We will update you on the progress once feedback from our IT department is received". 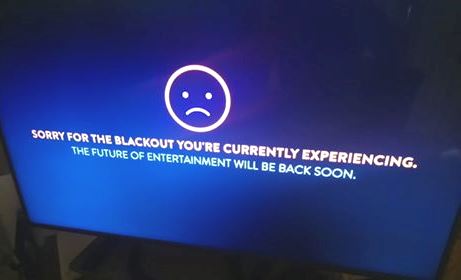 Now the blackout, "difficulties", "technical disruption" and problem that IT had to solve has been turned into a deliberate Cell C service cut, which means that either Cell C black lied to customers or that Cell C black executives and staffers didn't know and themselves were not aware that the TV channels service was abruptly being shut down.

Cell C on Tuesday responded to questions in a media enquiry from TVwithThinus made earlier, saying that Cell C had made a decision to review its Cell C black content strategy "in particular its linear channels and enter into negotiations with its content providers".

Cell C didn't say why it failed to warn the South African TV industry and its paying subscribers beforehand that the channels would go dark leading to speculation that it is channel suppliers who revoked access to their content over non-payment causing the black blackout crisis.

"We are taking the right steps to right-size the business, focusing on revenue generating activities and cutting costs where necessary. Our decision to reconfigure our product and services is part of putting the business on the right track," said Douglas Craigie Stevenson, Cell C CEO, in a supplied statement on Tuesday.

"We need to move forward based on a roadmap that is robust, profitable and in the best interests of Cell C and its customers. "Content remains part of the broader strategy and will continue to be offered, albeit in a different format."

Cell C said that "Cell C black customers will continue to have access to music, series and movies even though linear channels have been temporarily suspended. All impacted linear subscribers will receive alternative black products and services."

Besides offering a catalogue of on-demand programming including series and films, Cell C black also offered a carousel of linear TV channels ranging from entertainment and news to sports, music and lifestyle that viewers could watch through the video streaming service, exactly similar as to using a rooftop satellite dish like DStv or StarSat.

Cell C launched Cell C black, accessed through its own set-top box (STB) called the blackBOX, as well as through web browsers in November 2017 to compete with MultiChoice’s Showmax, Netflix South Africa and Amazon Prime Video in the growing but video streaming consumer market.

The Cell C black channels shutdown brings the Cell C black service perilously close to the group of already terminated and failed video streaming services in South Africa ranging from VIDI and the Altech Node to OnTapTV, Kwesé Play and Kwesé TV and others.

ALSO READ: Cell C black blackout as all its channels abruptly disappear without warning or explanation and customers fear a product implosion similar to Econet Media's shuttered Kwesé TV.
on 10:00:00 AM