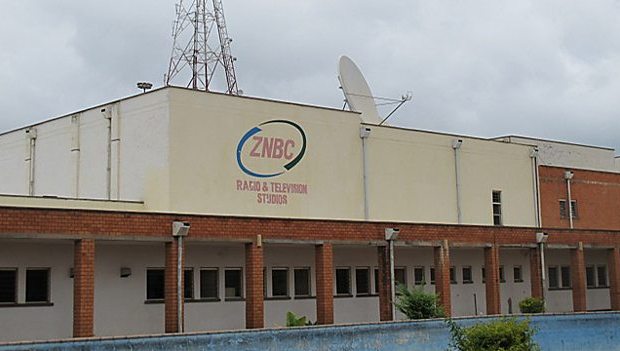 ZNBC has a 40% share in Top Star while StarTimes as a private company holds 60% in the venture that is supposed to be about public broadcasting.

An application was made on 20 June 2018 for the merger of this joint venture, effectively fusing a crucial public interest aspect of Zambia's digital terrestrial television between ZNBC and Hantex.

Top Star controls distribution of Zambia's digital TV signals, in what critics and TV industry observers have slammed as a seemingly corrupt government move; an obtuse operation that has infuriated the country's local TV industry.

The shocking Chinese takeover is part of a larger plan by StarTimes, operating across Africa as a commercially driven private company, to "help" the national public broadcasters in 20 African countries with their switch from analogue to digital terrestrial television (DTT) - often in dubious government deals and transactions with little scrutiny and transparency.

These StarTimes and local government public broadcasting deals are usually funded and funneled through setting up so-called joint ventures" funded by loans to the local African governments and their broadcasters from the Export-Import Bank of China.

In another 25 African countries StarTimes says it is helping with a joint project from StarTimes and the Chinese government to bring satellite TV and DTT - but with StarTimes content - to "10 000 villages in Africa".

In Ghana the issue recently blew up and got massive media attention when Ghana's local independent broadcaster's association highlighted how Ghana's switch to DTT has been allegedly hijacked, and how untransparent and apparently corrupt it is.

In Zambia, shareholding in ZNBC would only be relinquished upon full payment of a massive loan of over $400 million, according to one of the conditions of the merger.

Zambia's CCPC said its not true that the $400 million Chinese loan would take 25 years to repay, and claims that it will be repaid in 13 years. 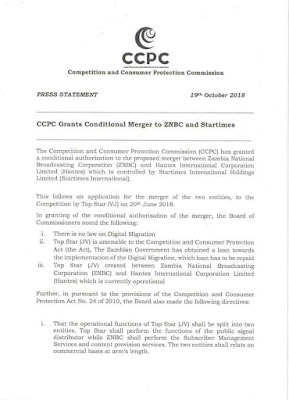 Zambia's Competition and Consumer Protection Commission (CCPC) announced the merger, that effectively means that China has taken over the running of ZNBC.

In a statement from the CCPC and signed by CCPC board chairperson Kelvin Bwalya Fube, the CCPC said that it has "granted a conditional authorisation to the proposed merger between Zambia National Broadcasting Corporation (ZNBC) and Hantex International Holdings Limited (StarTimes International)".

In justifying granting the merger, Zambia's CCPC says "there is no law on digital migration", and that the Zambia government has obtained a loan for the implementation of DTT migration that has to be repaid.


Chinese loan should be repaid in 13 years, not 25
Meanwhile ZNBC on Saturday said Zambia's national broadcaster remains owned by "citizens".

Mulenga Kapwepwe, ZNBC board chairperson, says the ZNBC can't be sold or taken over without the approval of Zambia's parliament.

"The statement by CCPC must be taken in context of ZNBC and StarTimes coming together to create a joint venture company called Topstar Communications Limited, says Mulenga Kapwepwe.

In a press briefing later on Saturday Kelvin Bwalya Fube, said that ZNBC hasn't been sold.

"When the signal and the content are controlled by one independent person, in this case the JV Top Star, we realized that there was going to be dominance of position on the market by Top Star."

"So as a board, we decided to split [it so] that the signal and distribution of the signal will be done by the JV Top Star."

"The content on the other hand will be controlled by ZNBC. This to us also raised public interest or security issues on the basis that ZNBC from inception has already enjoyed this monopoly of controlling as a public broadcaster."