SABC silent as chaos and confusion again reign at SABC1's botched and abruptly called-off open casting call as police is called in for crowd control.

Chaos and confusion again reigned at SABC1's botched auditions for one of the SABC channel's new drama series in Rosebank Johannesburg, similar to confusion at the Durban auditions a week ago that was called off halfway.

SABC1 told people that the channel is looking for people speaking fluent Zulu for several character roles, as well as one character speaking Swati. 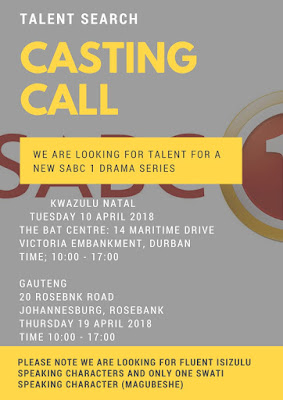 On Thursday hundreds of people showed up at 20 Rosebank Road where SABC1 said auditions would be taking place for a new drama series - only SABC1 wasn't there and neither were the producers after the open casting call was abruptly cancelled without notification.

People who queued at the Durban Exhibition Centre in Durban a week ago for the talent search spoke of similar chaotic scenes.

In Durban there was apparently only one admin person and no clear organisation or instructions, some people who were whished past the line for preferential treatment, scripts leaflets that people are supposed to read running out, no food or water available to buy, long queues, and the audition process that was completely abandoned during the afternoon after organisers allegedly gave up and just left.

In Johannesburg there was even more chaos yesterday when the auditions didn't take place, with no word from SABC1 or cancellation notice and hundreds of people part of the channel's audience, turning up and milling about, not knowing what was going on.

As tempers frayed and people got angry, police were called to disperse the crowd whose excitement and hope turned into disappointment and rage directed at SABC1 and its lack of proper communication.

SABC1 publicists Phil Mabitsela and Dzivhuluwani Siala didn't respond to TVwithThinus' media enquiry on Thursday afternoon about the confusion at the abruptly cancelled Rosebank auditions and there's been no statement from the SABC.

SABC1 viewers slammed the channel for its disorganisation and silence.


@Official_SABC1 auditions! Woooooow guys! Thanks for scamming us with fake open auditions. You are truly pushing us to withdrawing our support. You deserve failure. pic.twitter.com/uBIQd6y6v4
— ThisIsARepresentationOfMe (@Hermoso_Nisi) April 19, 2018


"SABC1 is so disorganised through these auditions," said Nomondensele. "We've been here since 08:00 but not a single person has been let in??"

"SABC1 get your house in order," said Naledi Chirwa. "You made a public announcement of open auditions, people are here to audition, some from other provinces! You cancel auditions ON THE DAY and don't even mention it on your page like you did to market it."


I got this clip from my friend... It looks like people still went there in number. 😢😭 pic.twitter.com/qjx6arfObd
— SKINNY GONZALES (@Geovi_Luv) April 19, 2018


Hermoso Nisi said "SABC1 you do realise we are the exact same people that you expect to go watch this drama of yours? What would happen when we decide to boycott this show when it airs?" adding that "SABC1 you are disrespectful, inconsiderate and deserve ZERO support for this drama".

"Thanks for scamming us with fake open auditions. You are truly pushing us to withdrawing our support. You deserve failure."

@Official_SABC1 posted an open audition advert in search for new zulu characters. We get here and we are told there are no Auditions. Why are we mislead?😑 pic.twitter.com/vLkdEw9yOe
— VintageGuru (@ZoeyCozah) April 19, 2018